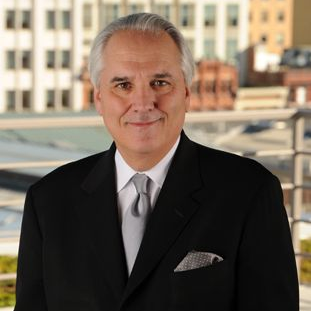 Vin Roberti is the Chairman and Co-Founder of Roberti Global LLC, where he advises some of the world’s largest and most respected Fortune 100 companies including Amgen, AT&T, Boeing, General Motors, Pfizer, Samsung, and Valero. Vin has also served as an advisor to several emerging democracies, including Dr. Ashraf Ghani, a highly-regarded former World Bank official, in his successful reform campaign to become President of Afghanistan in 2014. GQ Magazine named Vin as one of the top five most influential power brokers in Washington, D.C, writing “Roberti embodies the Hollywood ideal of a Washington power broker. You call [Vin] if your legislation is in trouble, or, really, if your life is.” Bloomberg Government named Vin as one of the Top Performing Lobbyists in 2018 and The Hill ranked Vin as a top lobbyist in 2017 and 2018. Vin also serves as Chairman of Palisades Tartan Media and its US and UK subsidiaries. He has been an executive producer for several films, including the Whitney Biennial Award-winning Documentary Going Upriver: The Long War of John Kerry and the highly regarded HBO documentary The Battle of amfAR. In October 2004, Variety named him as a “Top Ten” emerging leader in the independent film industry. In 2006 Mr. Roberti joined the board of the American Foundation for AIDS Research (amfAR), a leading AIDS charity that has invested more than $500 million in its programs and has awarded more than 4,000 grants to HIV/AIDS research teams worldwide. During his tenure, he chaired the Fund Development committee, and served on the influential Executive Committee. From 2000 to 2017, he served in a leadership capacity for amfAR’s extraordinarily successful Cinema Against AIDS gala at the Cannes Film Festival, which often raises over $25 million at the annual event. Under his tutelage, the Fund Development committee raised over $300 million towards amfAR’s life-saving mission. Most recently, he led the effort to institute the highest standards of good governance practices, including mandatory term limits for all its trustees. Having served the maximum number of terms, Mr. Roberti continues in his efforts to support the organization’s lifesaving mission. In addition to sitting on amfAR’s board, Mr. Roberti represents the City of New York’s interests on the MoMa PS1 Board, to which he was appointed by Mayor Bill De Blasio in 2013. Mr. Roberti has also served on the board of High Watch Recovery Center, a sober community and one of oldest and most respected twelve-step recovery programs. In addition, Mr. Roberti has served as a trustee on the boards of Sacred Heart University, SUNY’s Empire State College Foundation, and the Catholic Alliance for the Common Good. He was a long-term board member and former Chairman of the Center for Christian-Jewish Understanding, fostering inter-religious dialogue throughout the world. Mr. Roberti served four consecutive terms in the Connecticut House of Representatives and was one of the youngest individuals ever elected to a state legislature. Currently, he is a legacy member of the Democratic Senatorial Campaign Committee’s Majority Trust and the Democratic Congressional Campaign Committee’s Speaker’s Cabinet. He has acted as an advisor for numerous Presidential, House, Senate, and Gubernatorial races. He has four children and two grandchildren. He and his wife, Amy, divide their time among their residences in Washington, D.C., New York City, and Palm Beach.