January 30, 2014
The FDA approved 24 novel drugs last year by our count, in line with average approvals for the last ten years but down from the decade-high approvals seen in 2012. Our count is a bit lower than the FDA’s count of 27 new approvals, because we did not include imaging agents like Navidea’s Lymphoseek, or reformulations like J&J’s Simponi Aria. 2013 was the first year the breakthrough-designated therapies were approved, with three breakthrough therapies approved: Gilead’s Hep-C treatment Sovaldi, Janssen’s lymphoma treatment Imbruvica, and Genentech’s leukemia treatment Gazyva.

In all, ten of the approvals received priority, breakthrough, or orphan designations.

As in 2012, cancer treatments saw the highest number of new drugs, accounting for 36% of 2013 approvals, including the two biologics which were approved, both from Genentech. Genetech’s Gazyva, a treatment for chronic lymphocytic leukemia (CLL) was the first approved drug to have received breakthrough designation from the FDA. Genentech also received approval for Kadcyla, the first antibody-drug conjugate for treating HER2-positive metastatic breast cancer.

Bayer’s Xofigo, approved in May, is a “radiopharmaceutical” that improves survival in patients with bone metastases from advanced prostate cancer. Johnson & Johnson’s Mantle Cell Lymphoma treatment Imbruvica was approved in November, the second breakthrough-designated drug to be approved. Also notable was Celgene’s February approval for Pomalyst, an advanced multiple myeloma treatment. 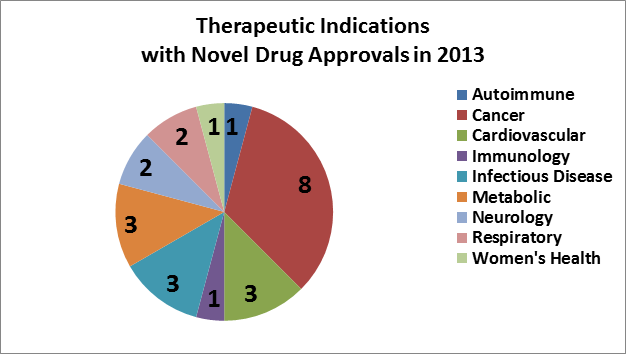 2013 was also a big year for infectious disease products, most notably in the fight against Hepatitis C. November and December brought the long awaited approval of two new treatments which are expected to revolutionize HCV treatment: J&J’s Olysio and Gilead’s breakthrough-designated Sovaldi.

Sovaldi is widely expected to be the next blockbuster drug. ISI’s Mark Schoenebaum suggests the drug could generate global sales of $5 billion in 2014 alone.

Next month, we’ll be discussing one of the hottest areas in cancer research, immunotherapy, at our 16th Annual BIO CEO & Investor Conference, February 10-11th in New York. Attendees will also have an opportunity to hear some of the biggest names in biotech, including Sanofi ‘s Chris Viehbacher, Alexion’s Leonard Bell, Alkermes’ Richard Pops, and many more. We hope you’ll be able to join us. Registration is available here.
More on This Topic