2015 FDA Approvals: Highest Levels in Over a Decade

January 8, 2016
2015 was a blockbuster year for FDA approvals of novel new medicines, many of them for serious and life-threatening conditions. As Dr. John Jenkins of the FDA’s Center for Drug Evaluation and Research (CDER) notes in a recent blog post, “During this past year, we approved many new drugs to treat various forms of cancer, including four to treat multiple myeloma, and others to treat lung, skin, breast, brain, colorectal, and other cancers. We also approved new drugs to treat heart failure, high cholesterol, cystic fibrosis, and irritable bowel syndrome, as well as the first approved reversal agent for a commonly-used blood thinner. And, for the second consecutive year, we approved more drugs to treat rare diseases than any previous year in our history.”

This number is higher than what has been widely been reported in the media as most outlets only report CDER’s tally of 45 new drugs. However, three novel biologics were approved by CBER in 2015, bringing the total to 48. The three biologic therapies approved by CBER are: 1) Imlygic, an oncolytic virus cancer therapy from Amgen that selectively replicates in and kills tumor cells, 2) Bexsero, a meningococcal disease vaccine from Novartis, and 3) Adynovate, Baxalta’s pegylated FVIII protein for the treatment of Hemophilia A: Below are some additional 2015 findings:

Here’s a breakdown by disease area: 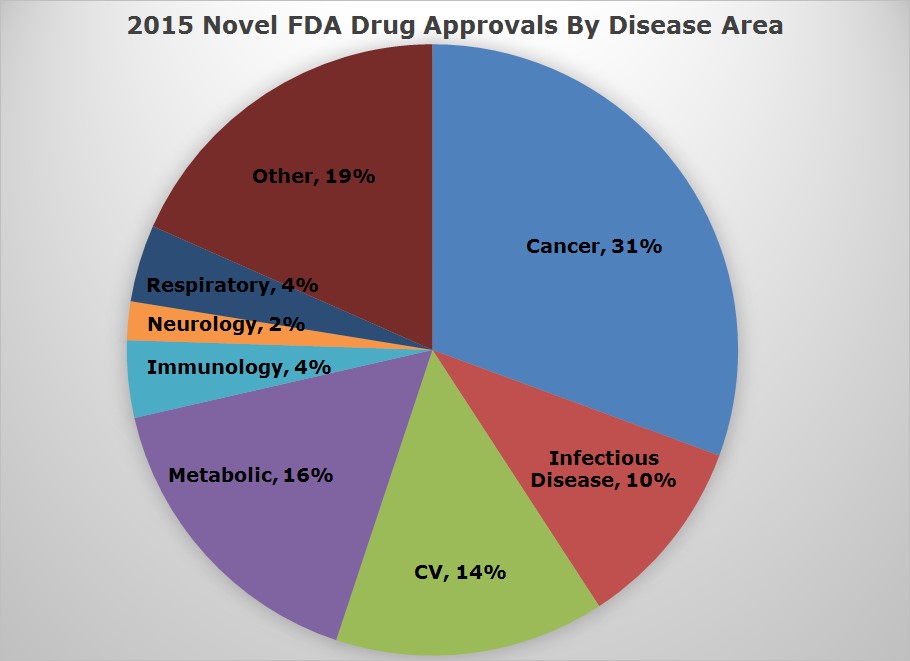 That’s the kind of innovation that BIO member companies work hard to bring to patients each and every day. Here’s to 2016!