7 Crops That Could Benefit from CRISPR

August 15, 2018
Since CRISPR was first described in 2005, the gene editing technology's potential impact on agriculture, human health and the environment has been covered more and more each day.

As Eric Niler writes in a piece for National Geographic, “one way to measure the rise of Crispr and other forms of gene-editing is by scientific publication. From two dozen journal articles in all of 2008, Crispr-related scientific-paper submissions now number 10 per day, and will shortly reach 10,000 total.”

And while a good majority of those studies focus on CRISPR’s human health applications, a significant amount of research has been dedicated to discovering CRISPR’s potential impact on agriculture.

In his piece, “Why Gene Editing Is the Next Food Revolution,” Niler includes an infographic that explores examples of how CRISPR is going to led to real benefits in agriculture – benefits that can help sustain the food supply, reduce food waste and promote environmental health. 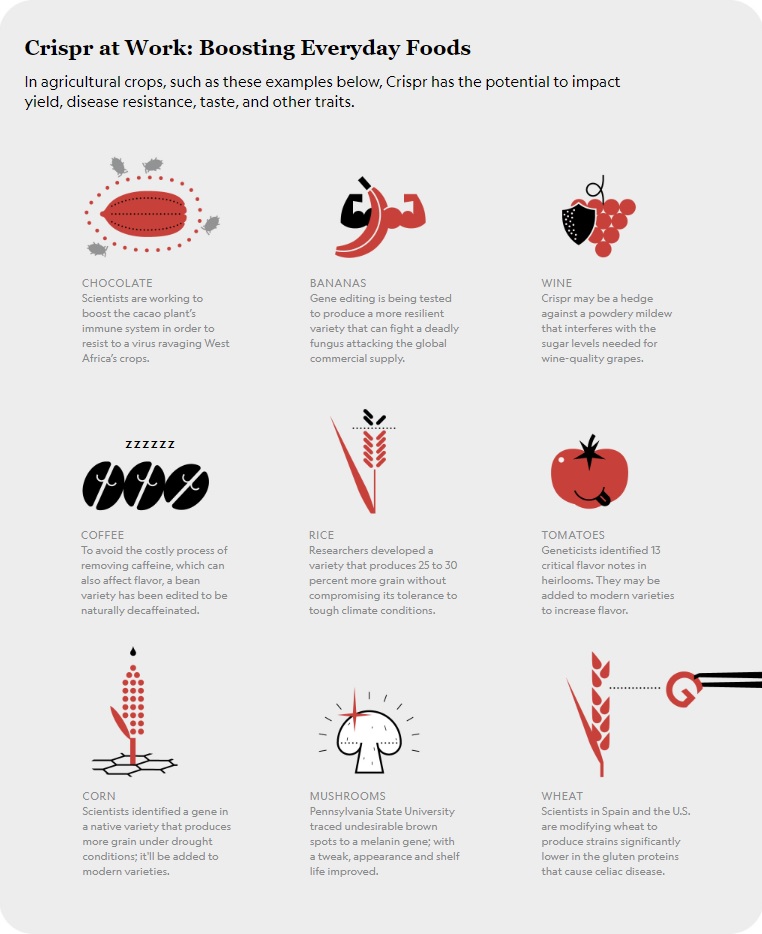 Let’s dive into seven of the crops included above, looking at why gene editing is being considered for each.

Cacao trees thrive in tropical environments – specifically regions that are 20 degrees north and 20 degrees south of the equator. Fungi and viruses also thrive in these environments. Unfortunately, this has put the world's supply of chocolate at risk as entire cacao tree farms are being infected. Compounding this epidemic is climate change, which is expanding environmental conditions ideal for fungi and viruses. Using CRISPR, however, scientists funded by the popular candy brand Mars are hoping to edit the trees’ DNA to withstand fungal and viral diseases in an increasingly warmer world.

Following the geopolitical shift that resulted from World War II, the banana industry experienced its own seismic change. In the 1950s, the popular Gros Michel banana had been essentially wiped out globally by Panama disease, a blight that blackens bananas from the inside out. Replacing this popular variety was the less-delicious Cavendish banana, which fills produce sections today. Now the Cavendish banana is under threat from a new incarnation of Panama disease, in addition to other diseases like banana wilt spreading throughout Uganda. Through gene editing, however, scientists are hoping to turn on the gene that enables the Cavendish to resist the blight,  saving the popular fruit from possible extinction.

Downy mildew, a powdery fungal disease that destroys grape vines, is costing grape growers nearly $200 million a year to combat. Moreover, the fungal disease is threatening to take down the wine industry as it overtakes vineyards across the west coast. Like bananas, however, scientists are encouraged by the promise of gene editing to alter the genes of grapes (this time turning a gene off) to make it less vulnerable to disease. Not only would wine lovers rejoice, but grape growers would save millions in chemicals to fight the spread of the mildew.

Surprising to some, the tomato was the first genetically engineered crop to be commercialized. The FLAVR SAVR tomato, as its name suggests, was genetically engineered to have a longer shelf life and better taste. The tomato did not have commercial success; however, geneticists are continuing to study the vegetable fruit, identifying critical flavors that can be gene edited into modern varieties.

Corn may be the most recognized GM crop. Today, there are several varieties of GM corn with traits such as insect resistance and herbicide tolerance. And rightfully so. Corn is used for much more than food. The crop is used as feed for livestock, biofuels for our cars, starch, alcohol and other industrial uses. Considering its broad use, it’s critical that corn continue to be able to grow as the climate changes. To ensure this is the case, scientists have identified a gene that allows the crop to produce more grain under drought conditions which they will look to incorporate into modern varieties.

Similar to what has been accomplished with potatoes, researchers are hoping  gene editing can reduce browning and increase shelf life for mushrooms. Gene editing holds tremendous promise to reduce food waste by increasing the time crops stay fresh and enhancing their outward appearance. This is significant considering the amount of food that is wasted each year: enough to feed up to 300 million people, according to the Untied Nations.

Gluten sensitivities may seem like a new fad but, for those with celiac disease, gluten is a very real threat to human health. Luckily, scientists are studying gene editing as a method to lower gluten proteins in wheat, resulting in reduced-gluten wheat which may be agreeable for those with gluten sensitivities or celiac disease. Reduced-gluten wheat is a promising new innovation in plant gene editing as researchers progress towards eliminating allergens in plants, like peanuts. Using gene editing to eliminate allergens would increase food safety overall.
More on This Topic