September 6, 2012
Wednesday at the National Press Club, several advanced biofuels companies joined BIO to showcase the progress the industry has made in recent years. 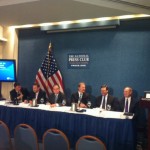 U.S. companies have worked to rapidly scale up advanced biofuel technology – through pilot and demonstration projects – and a number are now constructing and commissioning commercial-scale biorefineries.

The Renewable Fuel Standard (RFS) has been the industry’s bedrock policy behind this innovation. It provides the fundamental foundation driving private investment in America’s advanced biofuels industry. The RFS sets a path for U.S. energy security, reduced reliance on foreign oil, and a cleaner environment. And judging by the progress reported today, it’s working.

U.S. advanced biofuel production under the RFS could create hundreds of thousands of jobs for researchers, plant operators, and construction workers by 2022, according to a 2009 report from Bio-ERA.

“Advanced biofuels are creating careers, not just short-term jobs,” said Brent Erickson, Executive Vice President of BIO’s Industrial and Environmental Section before turning it over to company representatives to report on their progress.

Christopher G. Standlee, Executive Vice President of Abengoa Bioenergy, highlighted their biorefinery under construction in Hugoton, KS scheduled to start production in the fourth quarter of 2013. It will produce 26.5 million gallons per year of cellulosic ethanol. Download presentation

James C. Collins, President of DuPont Industrial Biosciences, talked about DuPont’s demonstration facility in Tennessee already producing ethanol from stover and a 28 million gallon per year facility in Iowa that DuPont will break ground on later this year. Download presentation

Pat Gruber, CEO of Gevo, talked about the company’s plant in Luverne, Minnesota currently starting to produce isobutanol, a second plant in South Dakota they plan to retrofit in 2013 and the numerous jobs they’ve created at each site. “When it comes to the RFS, a stable policy is good and you need to be able to have that to have a predictable industry,” Gruber said. Download presentation

Dan Cummings, Vice President of INEOS Bio, highlighted the company’s Florida plant, a recently completed facility about to start production. He added that the plant was responsible for new jobs and pumping more than $25 million into the Florida economy alone. Download presentation

Adam Monroe, President of Novozymes North America, talked about the critical decision this country made to decrease dependence on foreign oil supply, and how Novozymes and its partners have invested one billion dollars in bringing these technologies to market and creating associated jobs – adding that they are ready to invest one billion more. Their Blair, Nebraska manufacturing plant for enzymes has created 100 careers for Nebraskans and Iowans. Download presentation

Doug Berven, Vice President of Corporate Affairs for POET-DSM Advanced Biofuels, talked about making cellulosic ethanol a commercial reality as advanced biofuels companies lead the transition from a petroleum-based economy to a biobased one. Their Iowa plant will produce 20 million gallons in late 2013 and will ramp up to 25 million after that. “Let the RFS do its job and the tech companies, farmers, and manufacturers will do theirs, leading the country to clean, renewable fuels,” Berven said. Download presentation

To see more progress on this front, look at BIO’s picture book of biorefineries across the United States, “Visible Progress in Commercialization of Advanced Biofuels, Biobased Products and Renewable Chemicals”. It includes commercial facilities that have been in operation for as many as 10 years and new ones under construction. It also shows demonstration and pilot biorefineries that are scaling up innovative processes.

The picture book provides visible evidence that building the biobased economy will generate additional jobs in manufacturing, agricultural production and forestry, transportation and distribution, and construction, with biorefineries being built in every region of the United States, in traditional manufacturing regions and in rural areas.
More on This Topic