On Ag Day, celebrate the innovations that have made agriculture sucessful. 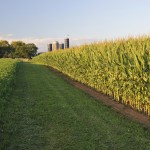 National Ag Day is a day to recognize and celebrate the abundance provided by agriculture.  And today’s modern agriculture practices are more beneficial than ever before for the environment, the economy, food security and consumers.

Thanks to the modern agricultural practices made possible by agricultural biotechnology, American farming is becoming more environmentally sustainable than ever before.

Because of no-till and reduced-till practices associated with the use of biotech crops, soil quality and carbon storage has improved, on-farm fuel use has declined, and greenhouse gas emissions have been reduced.  This is equal to removing 17.7 billion kg of carbon dioxide from the atmosphere or equal to removing 7.8 million cars from the road for one year.

Thanks to improved seeds and innovations in animal agriculture provided by biotechnology, farming as a career is more lucrative than ever before, and the economic benefits are being shared with farmers around the world – including more than 15 million small-holder famers in developing countries.

According to a recent study, producers who grow biotech crops have seen substantial net economic benefits at the farm level, accounting to $10.8 billion annually.   Farm families have gained added economic benefits, as better management tools have created more time for them to earn off-farm income.

Thanks to modern science and the traits provided by agricultural biotechnology, food is safer, healthier and more nutritious for consumers around the world.

Beyond producing more food on less land, biotechnology in agriculture is being applied to produce more nutritious foods such as heart-healthy oils which aid in the fight against obesity and vitamin-enriched staple foods that combat malnutrition.

Thanks to the yield benefits provided by agricultural biotechnology, farmers around the world are better equipped to provide for a growing global population.

Innovation in agricultural science and the use of biotechnology will be required to feed the 9.1 billion people who will inhabit our planet by the year 2050.  According to the United Nations, feeding this many people will require raising overall food production by 70 percent, and as much as 100 percent in developing countries.

…Providing solutions for the environment, the economy, food security and consumers.  This is how agricultural biotechnology is helping to better heal, fuel, and feed the world.
More on This Topic