The Art of the Biotech Deal at BIO CEO & Investor Conference

As one of the largest investor conferences focused on established and emerging publicly-traded and select private biotech companies, the event drew an enthusiastic group ready to make deals and find the right partners to move innovation to the marketplace. The key relationship-building was reflected in the 2,700 individual meetings that took place during the conference, scheduled through the partnering system.

Things were very busy at BIO’s buzz center where interviews with thought-leaders focused on breakthrough technologies and the investment climate for biotechnology.


There was no shortage of twitter activity underscoring the impact of this event.

The market is up. Could it be thanks to #BIOCEO18 also being in NYC

Got to chit chat with biotech veteran Deborah Dunsire at #BIOCEO18 this a.m. Her take on the current biotech investment outlook: "It's not the boom of 2013, but it's not the nuclear winter of 2009 either."

.@barbara_ryan12: "This will probably be a record year in terms of M&A and consolidation." @sciam #BIOCEO18 Summit on #biotech and #Cancer. pic.twitter.com/uZgDXqldcB

Great day at #BIOCEO18 @MichaelSierra16 @LEOscitech with other thought leaders discussing the crossroads of technology and #dermatology in the “Advances in Dermatology” panel pic.twitter.com/YSZa8YVMxf

“Our mission is supporting national advocacy, science and research while supporting the actionable results of promoting women in science” —@AWISNational ?? #BIOCEO18 #BIOontheroad pic.twitter.com/8bFL6zK9Ln

A gallery of photos highlights the networking that may lead to the next advancements in life-saving treatments. 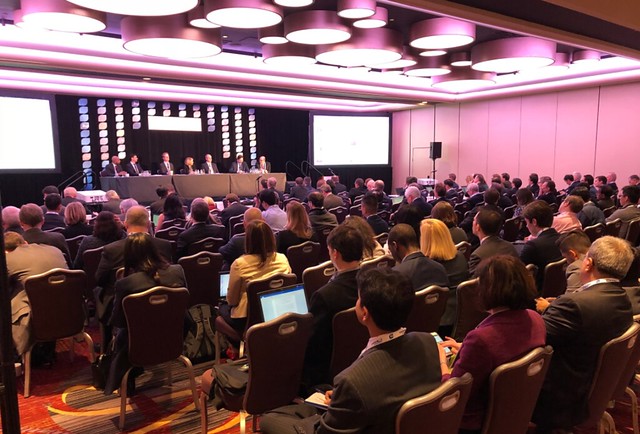 The Conference program offered provocative and thought-provoking sessions on Opioids, China and tax reform. A full recording is available for purchase here.
BIO sponsors meetings and conferences throughout the year that support industry-wide success including the BIO International Convention which attracts roughly 16,000 attendees from around the globe. This year’s event will be held in Boston June 4-7
More on This Topic