March 8, 2017
International Women's Day (IWD) is celebrated each year on March 8. It is a global day celebrating the social, economic, cultural and political achievements of women. IWD has been observed since the early 1900's and is a collective day of global celebration and a call for gender parity. No one government, NGO, charity, corporation, academic institution, women's network or media hub is solely responsible for International Women's Day. Many organizations declare an annual IWD theme that supports their specific agenda or cause.

To celebrate IWD, BIO saw it fitting to announce that it is now accepting nominations for its annual Rosalind Franklin Award. Rosalind Franklin conceived and captured Photograph 51 of the "B" form of DNA in 1952, while at King's College in London. This photograph, acquired through 100 hours of X-ray exposure from a machine Dr. Franklin herself refined, revealed the structure of DNA. The discovery of the structure of DNA was the single most important advance of modern biology. James Watson and Francis Crick, working at Cambridge University, used Photograph 51 as the basis for their famous model of DNA, which earned them a Nobel Prize in 1962. Though sometimes overlooked, Rosalind Franklin’s critical work and discovery in the field has allowed the biotechnology industry to become what it is today.


Brent Erickson, Executive Vice President, Industrial and Environmental at BIO, stated, “Rosalind Franklin is an inspiration to female scientists; and yet the importance of her involvement in the discovery of DNA is often undervalued. With this award we hope to honor Rosalind Franklin’s legacy and all women who have who have defied odds and made lasting contributions to the field of biotechnology.”

Nominees must be living individuals who exhibit leadership qualities, and have pioneered efforts in industrial biotechnology. Applicants should demonstrate significant innovative contributions in a field integral to the advancement of a biobased economy.

The Award will again be sponsored by the Rosalind Franklin Society whose goal is to support and showcase the careers of eminent women in science.

The 2017 BIO Rosalind Franklin Award will be presented at the 2017 World Congress on Industrial Biotechnology, which will be held July 23-26, 2017 at the Palais des congrès de Montréal in Montréal, Québec, Canada. The deadline for nominations is March 24, 2017. 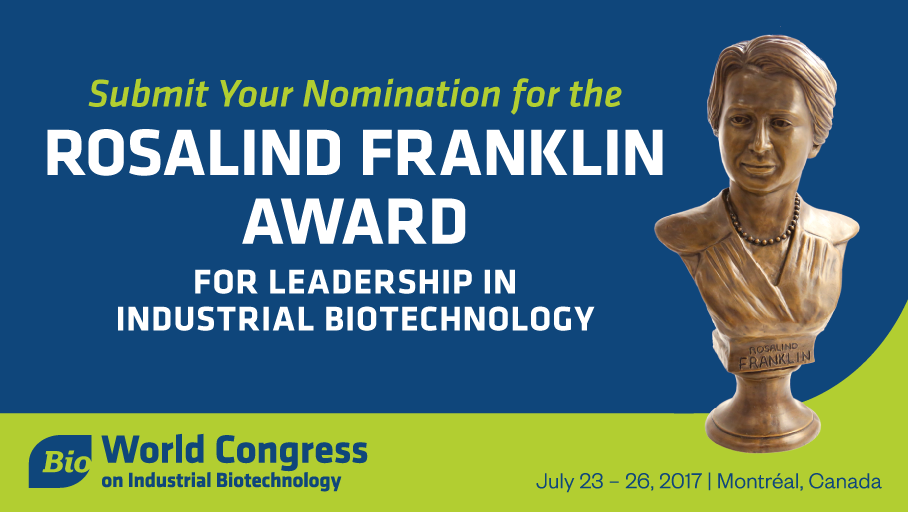