February 26, 2014
Farmer adoption of genetically engineered (GE) crops is associated with time savings, lower insecticide use, and more conservation tillage, according to a new USDA study. 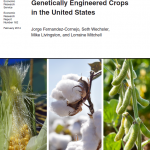 According to USDA: “Genetically engineered (GE) crops (mainly corn, cotton, and soybeans) were planted on 169 million acres in 2013, about half of U.S. land used for crops. Their adoption has saved farmers time, reduced insecticide use, and enabled the use of less toxic herbicides. Research and development of new GE varieties continues to expand farmer choices.”

An unfortunate article by Reuters claims “GMO crops are under intense scrutiny” despite the latest ISAAA report released two week ago affirming that biotech crops are the fastest adopted crop technology in recent history. “This adoption rate speaks for itself in terms of its resilience and the benefits it delivers to farmers and consumers,” says ISAAA.

The Reuters report also fraudulently urges the reader to believe that “some scientific studies are reporting that the chemicals used on the crops are linked to disease and illness,” when thousands of studies have found no such links.

What is regrettably lacking in media coverage of this report is a summary of most of the report’s key findings, such as:

It’s important to note that the ERS report does look at trends in glyphosate use and concludes: “An overreliance on glyphosate and a reduction in the diversity of weed management practices adopted by crop producers have contributed to the evolution of glyphosate resistance in 14 weed species and biotypes in the United States.”

Weed resistance is indeed a concern for all of agriculture – not just for biotech crops – but can be mitigated through the use of best management practices (BMPs). BMPs include applying multiple herbicides with different modes of action, rotating crops, planting weed-free seed, scouting fields routinely, cleaning equipment to reduce the transmission of weeds to other fields, and maintaining field borders.