Beyond the Buzz: Post-Show Report 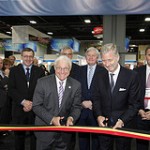 Behind the scenes at BIO we can now take a moment to reflect on last week’s event and imagine what attendees will take away and remember about this year’s Convention. Based on the consistently positive feedback we received, it is indeed difficult to narrow it down!

Many attendees told us that the program was the strongest to date and that there was ‘something for everyone’ within the 15 tracks and more than 125 breakout sessions. As always, the biggest complaint that we hear is that there is not enough time in the schedule to go to all the sessions that are of interest.

The Convention has emerged as the economic development opportunity of the year within biotech circles. Countries and states are clamoring for biotech investment, and the Convention gives them the ideal platform to publicize and promote what they have to offer to industry leaders. International and domestic public officials show us with their participation that they recognize the enormous potential of the industry. This year’s event drew more than 100 public officials and 11 U.S. Governors.

With an increase in our international attendance, the globalization buzz was a key take away of the event.  BIO/Scientific American’s Super Session and release of the Worldview Report and Scorecard ignited dialogue among international attendees on how to further bolster biotech within their borders.

Undoubtedly, the 2011 event sparked future partnerships and deals. Many will remember this year’s Convention as the birthplace of a collaboration that will transform their business model and speed the path to a breakthrough. The Convention hosted more than 21,000 partnering meetings – a new record. We analyzed partnering data to determine which assets are in the greatest demand, check it out. Our tagline – ‘Leadership. Partnerships. Breakthroughs.’ –  Couldn’t  be more fitting.

The BIO Exhibition generated excitement and energy throughout the event with more than 1,800 exhibitors. I talked to numerous exhibitors on Thursday who were pleased with the quality and quantity of contacts that they received at the Convention.

For me, the Convention was particularly poignant as we returned to Washington, which is where BIO is located. Having the event in Washington DC gave us the opportunity to communicate the value of biotech breakthroughs and potential of the industry to policymakers and the regulatory community.

Finally, the Convention drummed up excitement for Boston in 2012. In case you missed it – Check out our Flash Mob at the Massachusetts Pavilion.

We hope everyone enjoyed this year’s Convention, and we look forward to seeing you in Boston next year!
More on This Topic