January 17, 2013
What was your top Biopharma highlight for 2012? If it wasn’t the stellar move in the AMEX Biotech Index (up 42%), or the reauthorization of PDUFA, then perhaps it was the decade high for innovative drugs approvals. We would need to go back to the 1990s to find a year with as many FDA approvals for novel drugs as we had in 2012. Adding to the positive trend in numbers, up 29% from the robust 31 approvals in 2011, a number of last year’s approvals came earlier than expected. Vertex’s Kalydeco and Ariad’s Iclusig, for example, both came three months ahead of their respective PDUFA dates. Over 50% of the approvals had FDA Priority review or Orphan designations. 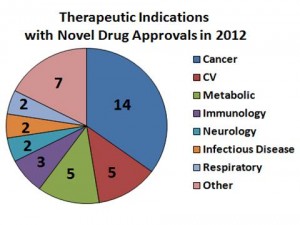 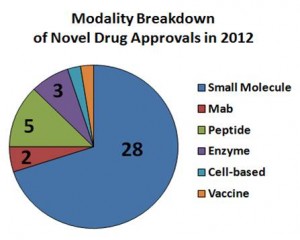 On the biologics front, it was not antibodies that stole the show last year, but rather therapeutic enzymes and synthetic peptides. Among the enzymes approved was Jetrea, a recombinant protease from Belgium-based Thrombogenics (EBR:THR) that can be used to treat vision distortions. Protalix (PLX) and Pfizer (PFE) brought forward the first enzyme derived from plant cells. This recombinant enzyme, now branded as Elelyso, can now be used to treat adult Type 1 Gaucher Disease. Another recombinant enzyme, a carboxypeptidase named Voraxaze from BTG International (LON:BTG), was approved for lowering methotrexate levels in patients undergoing chemotherapy.

The first FDA approval of a synthetic peptide for respiratory distress syndrome (RDS) in premature infants was granted to Discovery Labs for Surfaxin. In the first half of 2012, the media and Wall Street spotlight focused on peptides heading into competitive markets: Amylin’s (now BMY) Bydureon, a long acting GLP-1 agonist for Type 2 Diabetes and Affymax’s (AFFY) Omontys, a long acting erythropoiesis-stimulating agent (ESA) for the treatment of anemia due to chronic kidney disease (CKD) in patients on dialysis. Omontys was AFFY’s first drug approval. Ironwood also had a first approval with a peptide compound, Linzess, for irritable bowel syndrome with constipation (IBS-C) and chronic constipation. Late in the year, Gattex, a degradation resistant GLP-2 peptide analog from NPS was approved. 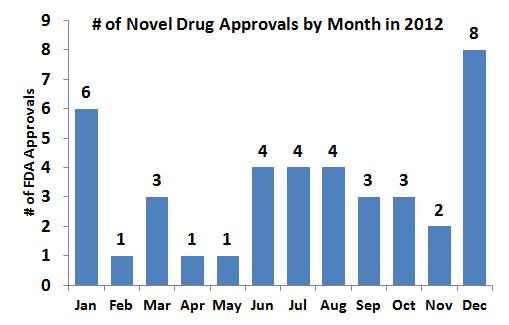 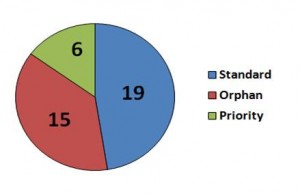 Orphan and rare diseases also took the stage in 2012, with 15 molecules approved under the FDA's Orphan designation. Late in December, small biotech Aegerion (AEGR) won its first FDA approval for Juxtapid to treat HoFH (homozygous familial hypercholesterolemia, a rare genetic disorder that causes unmanageable cholesterol levels. It was Vertex (VRTX) that kicked off the year for the rare disease space with Kalydeco, used for a specific mutation in Cystic Fibrosis patients. The rare occurrence of multi-drug resistant tuberculosis can now be treated with Jannsen’s (JNJ's) approved Sirturo.  Novartis (NVS) also added to the orphan portfolio with a somatostatin analog (Signifor) for Cushing's Disease patients unable to undergo pituitary surgery or whose surgeries were not successful. 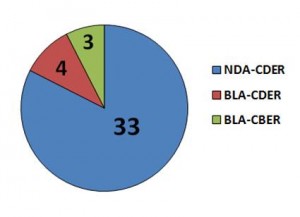 Looking to hear more about the launch of these new products? CEOs from public companies with 2012 FDA approvals, such as Gilead (GILD), Onyx (ONXX), Affymax (AFFY), Exelexis (EXEL), Arena (ARNA), and Protalix (PLX), will be presenting at the upcoming BIO CEO Conference February 11-12th in New York. As the world’s largest independent conference focused on publicly traded biotechs, it is the essential event for scouting 2013’s Phase III catalysts and NDA/BLA filers.

Methodology: We analyze each approval from the FDA and count only drugs that are approved for the first time (first indication). Unlike other counting methods for new approvals, we do not include imaging agents (such as last year’s Amyvid, Choline 11, and Prepopik), and avoid double counting (for example, Zaltrap for colon cancer is excluded, as the same molecule (aflibercept) was approved for wet macular degeneration in 2011). CBER approved a few cord blood products in 2012, where only the first such product was counted as they are nearly identical in composition.

CBER approvals can be found here:

CDER approvals can be found here:

Below is a listing of all 40 novel drug approvals: