January 30, 2012
Bill Gates has a terse response to criticism that the high-tech solutions he advocates for world hunger are too expensive or bad for the environment:  Countries can embrace modern seed technology and genetic modification or their citizens will starve. 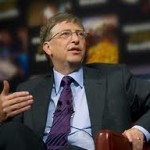 When he was in high school in the 1960s, people worried there wouldn't be enough food to feed the world, Gates recalled in his fourth annual letter, which was published online on January 24 and reported on by the AP in the Huffington Post. But the “green revolution,” which transformed agriculture with high-yield crop varieties and other innovations, warded off famine.

Gates is among those who believe another, similar revolution is needed now. The Bill & Melinda Gates Foundation has spent about $2 billion in the past five years to fight poverty and hunger in Africa and Asia, and much of that money has gone toward improving agricultural productivity.

Gates doesn't apologize for his endorsement of modern agriculture or sidestep criticism of genetic modification. He told the Associated Press that he finds it ironic that most people who oppose genetic engineering in plant breeding live in rich nations that he believes are responsible for global climate change that will lead to more starvation and malnutrition for the poor.

In his 24-page letter, the Microsoft Corp. chairman lamented that more money isn't spent on agriculture research and noted that of the $3 billion spent each year on work on the seven most important crops, only 10 percent focuses on problems in poor countries.

“Given the central role that food plays in human welfare and national stability, it is shocking – not to mention short-sighted and potentially dangerous – how little money is spent on agricultural research,” he wrote in his letter, calling for wealthier nations to step up.