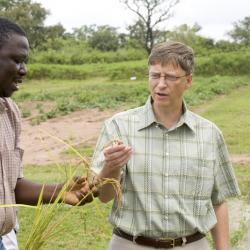 “I’ve never been a farmer,” Bill Gates confessed at The Chicago Council’s Symposium on Global Agriculture and Food Security. “Until recently, I rarely set foot on a farm.”

Yet, through the Gates Foundation, he is one of the world’s most powerful advocates for poor farmers and he is helping them gain access to technology that will help them grow their way to self-sufficiency.

Right now, the average farmer in sub-Saharan Africa produces just over a ton of cereal per acre, Gates explained at the event. An American farmer? Seven times that. The difference? The American farmer has tools and techniques that an African farmer does not – including access to genetically modified seeds.

The Gates Foundation funds the International Rice Research Institute’s Stress Tolerant Rice for Africa and South Asia (STRASA) project. Through this project, farmers are gaining access to advances in agricultural biotechnology and are helping to develop high-yield rice varieties with tolerance for droughts, floods, and saltwater.

“One farmer told me he planted this new variety [Swarna Sub 1] next to the old one he used to plant,” Gates explained. “When the rains flooded his fields for 10 days, the old variety was totally destroyed, while the new rice yielded more than 3 tons a hectare. That’s twice the yield that farmers get from the old rice variety without floods.”

A record 15.4 million farmers in 29 countries are using biotech crops – and the trend continues to grow. Ninety percent of these (over 14 million) are resource-poor farmers in developing countries and farmers have earned higher incomes in every country where biotech crops are grown. Read BIO’s FAQs about biotech crops.

Helping poor farmers access the latest technology, grow more crops, and get their surplus to market is, quite possibly, the most effective way to reduce global poverty and hunger.
More on This Topic