April 12, 2017
BIO’s One-on-one Partnering™ system will likely host 1,100 partnering meetings per hour during this year’s BIO International Convention. The program is the largest partnering program under one roof and is expected to host 40,000 meetings at BIO 2017 in San Diego, June 19 – 22. The versatile system is one of the biggest draws to the Convention, allowing users to create profiles containing company presentations, clinical trial data, YouTube videos—anything that will show what the organization is about and help it reach its target audience. Since 2015, the partnering system has grown by 23% and the steady growth is expected to continue at this year’s event. 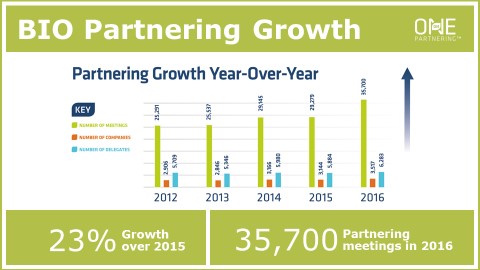 During a recent webinar on tips for getting the most out of BIO’s One-on-One Partnering™, participants learned that getting started early is the key to success. With more than 42% of Convention attendees at the CEO, VPs or C-level, and a third of the attendees coming from outside the United States, it is important to get in line early to maximize the ROI. Analysis of prior meetings showed that companies starting the process early booked 11 times more meetings than those waiting until the last minute. Another reason to start early is the discounted registration rate available now through April 27.

The system opened in mid-April, so let the fun begin! Once your meeting requests are accepted BIO does all the scheduling (in late May).

Making the system even more convenient is the new mobile app—found in google and apple stores – that permits access to scheduled meetings and programming. During the Convention, the partnering meetings begin on the afternoon of Monday, June 19 and finish on Thursday, June 22. Meetings are scheduled in both the BIO Business Forum and exhibitor booths.

Other important advice? Concise, targeted subject lines and specific, detailed profiles go a long way to scoring the meetings you want. Instead of “Request a Meeting”, better to say “Our CAR-T technology addresses X disease”. This helps you get to the top of the list of people looking for that specific technology. Also, make sure the company profile is as up to date as possible, including such things as development phase, therapeutic areas, financing secured to date, geographic location etc.

More tips and detailed information about partnering are available in this webinar posted on BIO’s YouTube Channel.
More on This Topic