January 13, 2012
The U.S. Department of Agriculture has announced that the Government of Japan approved Hawaii’s Rainbow papaya for commercial shipment to Japan. The Rainbow papaya is genetically engineered to be resistant to the papaya ringspot virus. This announcement marks the beginning of a new chapter for Hawaiian papaya growers. 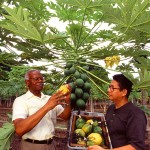 “The market opening in Japan is great news for Hawaii's papaya producers and even better news for American agricultural exports,” said Michael Scuse, Acting Under Secretary for Farm and Foreign Agricultural Services.

In the 1990s, an outbreak of the papaya ringspot virus decimated Hawaii's papaya crop.  Scientists from Cornell University, the University of Hawaii, The Upjohn Company and USDA's Agricultural Research Service used biotechnology to develop the Rainbow papaya, which is resistant to the virus.  After receiving full clearance from the U.S. government, the Rainbow papaya was commercialized in 1998.  Now, the majority of Hawaii's papaya crop is resistant to ringspot virus through genetic engineering.

“The story of the genetically engineered Rainbow papaya is a prime example of how biotechnology can help farmers and consumers by literally saving the Hawaiian papaya industry from extinction,” says BIO’s President and CEO Jim Greenwood.  “This announcement ensures that Hawaii's papaya producers will continue to help grow our nation's agricultural sector by expanding exports, creating jobs, and strengthening our nation's eceonomy.”

Japan was once the major market for Hawaiian papayas, with annual sales reaching $15 million in 1996. These sales dropped to $1 million by 2010 while U.S. exporters awaited Japan's approval of Rainbow papaya.  With Japan's approval for import of Rainbow papaya, U.S. papaya producers are set to regain access to this important market, supporting jobs through increased exports.
More on This Topic