“Scientific discoveries only achieve positive impacts once they are successfully deployed throughout society, and that requires a deep network of people,” said Estes in response to receiving this award. “Throughout my career, I have focused on developing the supply chains necessary to commercialize biotechnology innovations, motivated by a passion to achieve sustainability in industry. I am honored to accept the Rosalind Franklin Award on behalf of the numerous colleagues who have shared that passion.” 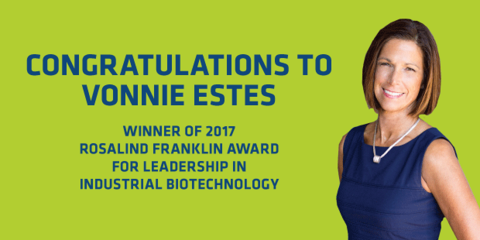 Vonnie Estes is currently an independent business consultant. She was most recently Vice President of Business Development at Caribou Biosciences, leading the company’s partnerships and business development activities in agricultural and industrial biotechnology. Prior to joining Caribou Biosciences, Vonnie Estes served as Managing Director for GranBio, where she oversaw the company’s continued expansion and growth across North America and was responsible for identifying and licensing new technologies, overseeing large capital investments and raising brand awareness. Vonnie Estes is a Board Director of Microvi Biotechnologies, a member of the Iteris ClearAg Advisory Council, a member of the Advisory Board of Agile BioFoundry, and a member of Biomass R&D Technical Advisory Committee at the US Office of Energy Efficiency and Renewable Energy. She formerly served on BIO’s Industrial & Environmental Section Governing Board.

The Award will again be sponsored by the Rosalind Franklin Society, whose goal is to support and showcase the careers of eminent women in science. “Rosalind Franklin made an important contribution to the discovery of the structure of DNA. Her work serves as an inspiration and model to female scientists. Throughout her distinguished career, Vonnie Estes has made numerous contributions to the commercial development of new biotechnologies, creating revolutionary products that are good for people and the planet,” said Rita R. Colwell, PhD, President of the Rosalind Franklin Society and Distinguished University Professor at the University of Maryland College Park and John Hopkins Bloomberg School of Public Health.

Rosalind Franklin conceived and captured Photograph 51 of the "B" form of DNA in 1952, while at King's College in London. This photograph, acquired through 100 hours of X-ray exposure from a machine Dr. Franklin herself refined, revealed the structure of DNA. The discovery of the structure of DNA was the single most important advance of modern biology. James Watson and Francis Crick, working at Cambridge University, used Photograph 51 as the basis for their famous model of DNA, which earned them a Nobel Prize in 1962. Though sometimes overlooked, Rosalind Franklin’s critical work and discovery in the field has allowed the biotechnology industry to become what it is today.

Vonnie Estes is the 4th recipient honored with the annual Rosalind Franklin Award; past recipients include: