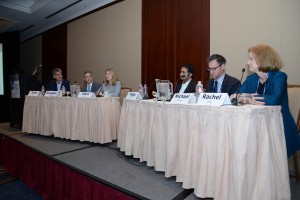 The discussion began with a discussion of the IPO market. MPM Capital's Todd Folly noted that there have been over 100 biotech IPOs since the beginning of last year, and asked whether that window is still open. Some panelists disliked the “window” metaphor, but the overall consensus is that the opportunity is still there, if narrowing.

GlyocoMimetic's Rachel King noted, “I would never say the window is closed. I would say that it is narrowing. We can see that because of the way the deals are pricing and the pressure that the deals are coming under."

Dicerna Pharmaceuticals' Doug Fambrough concurred: “I would echo Rachel that I don’t like this window metaphor. I don’t think it captures the dynamics. I think it’s more like a spigot. It could be all the way off: ’01, ’02, ’03, ’08, ’09. But otherwise it’s a question of ‘what’s the flow through there?’, and pricing is a reflection of the flow.”

The panel was optimistic about the future of the sector, with external risks, including political pressure on price presenting the main reasons for worry.

ROTH Capital Partners' Michael Margolis enumerated some of those: “The market right now is digesting a lot of things. We’ve seen a lot of volatility in the last few weeks, but all in all the market is doing pretty good given what’s out there... geopolitical issues, domestic policy, foreign policy, we’ve got ISIS, we’ve got Ebola. Again, a lot of things, and I think that’s probably the biggest risk in the market: more of these external shocks to the system could derail it.” But he was confident that companies with a solid business plan to drive milestones and value in the short to medium term will be able to continue raising money.

Forest Laboratories' Ellen Lubman concurred that the biotech rally has been driven by strong fundamentals, with the greatest risk presented by external factors.

Rachel King gave three reasons for her optimism and assessment that the fundamentals of the industry are strong. The first is that the science is outstanding: “With every year that goes on we see more discoveries that are going to ultimately drive drug discovery and drug development.” The second is the amount of money raised by companies in the past several years, giving them tremendous and unprecedented opportunities to capitalize on those discoveries. Finally, she noted that the FDA “has truly become more flexible recently,” which changes the economics of drug development by allowing new treatments to advance more quickly through the discovery and development cycle.

Doug Fambrough was similarly positive on the fundamentals, but cautious about external risks: “We are creating value here, it’s not a zero-sum game, and there is great science, a lot of products, and a lot of unmet medical need. There is growth that this industry can enjoy for a long period of time. We are susceptible to something really bad happening somewhere else; we could still be roadkill. We just have to cross our fingers that that’s not going to happen.” 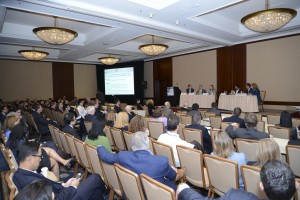