June 5, 2018
Innovation is at the forefront of the biotechnology industry, and at the 2018 BIO International Convention, we’re celebrating the history of innovation that’s improving the lives of patients around the world. During his keynote address, BIO President and CEO Jim Greenwood highlighted important milestones recently reached by the biotech industry:


“[The Food and Drug Administration] gave an historic green light to the very first commercially approved gene therapy: Novartis’ CAR-T treatment – a cell-based gene therapy that can modify a patient’s own blood cells to attack a deadly form of childhood leukemia that hasn’t responded to any other treatment.

“Seven weeks later came a second landmark approval. Gilead … received approval for a CAR-T therapy with the potential to send cancer into remission for thousands of patients with aggressive lymphoma.

“Then in December, the FDA approved Spark Therapeutics’ gene therapy for inherited retinal disease. By correcting a rare genetic defect, this breakthrough treatment can prevent children from going blind.”

History indeed. As Greenwood also noted, “These approvals were the culmination of decades of research and testing. But this is just the beginning.” A new report by BIO provides a glimpse of what the future looks like. 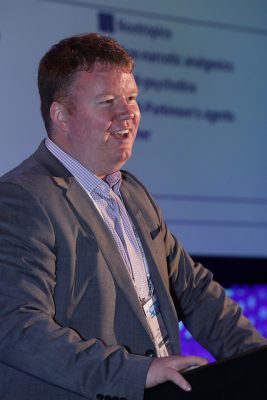 Sam Ulin, Principal at ClearView Healthcare Partners, speaking at "What’s Next: The Landscape of Innovation in 2018 and Beyond"[/caption]

The report, entitled “Emerging Therapeutic Company Investment and Deal Trends,” includes a review of the current innovation pipeline for emerging biotech companies. Authored by BIO’s own Dave Thomas and Chad Wessel, the report notes that “total active clinical-stage programs reached a record 6,679 with 71% of programs involving emerging companies.” But just want kind of novel cures and treatments are moving through this robust pipeline of innovation?

That was the subject of a session held at BIO 2018 entitled, “What’s Next: The Landscape of Innovation in 2018 and Beyond.” The session featured Sam Ulin, principal at ClearView Healthcare Partners, a group of leading strategy consultants to the life sciences industry. Ulin noted key trends in biopharmaceutical research and development, such as:

“You see oncology as a space where there’s a disproportionate level of research activity. A number of emerging early mechanisms with compelling science provide a critical share of voice behind them from an investment perspective.

“CNS is a space where pharmaceutical companies take a more of a ‘wait and see’ approach on the early science, but there is still a compelling volume of innovative and emerging mechanistic science that supports the efforts and innovation in its space.

“The anti-infective space is one that has increasingly come back to the HIV marketplace in terms of emerging targets as an area of emphasis.”

Ulin also provided a “deep dive” into how “the landscape of nucleic acid technologies [has] evolved.” It what he described as providing “tremendous opportunity,” Ulin explained the emerging technologies that exist in this space, which include extra-chromosomal gene therapy, genome editing and mRNA therapy. He highlighted breakthrough therapies that have emerged in this area and received FDA approval in recent months.

This means right now patients are benefiting from the power of biopharmaceutical innovation, and no one knows how to harness that power better than small innovators based in the United States. As BIO’s Dave Thomas noted:

“When we look at innovation, it’s the small companies that are doing the innovating. When we break that down geographically, 66 percent of those innovative companies are in the U.S.”

It’s that spirit of innovation that has propelled BIO and its members for the last 25 years, and it will continue to do so in the future. As Greenwood said of BIO earlier today, “We don’t just represent an industry; we represent a ground-breaking technology.”
More on This Topic