February 1, 2013
The 2012 M&A results are in and trends are mixed. Last year was a down year in terms of total acquisitions and total dollar value amounts vs 2011.  What was not down however was the earnout structures embedded in these deals. More and more M&A transactions are looking like partnering deals structured with CVRs accounting for the bolus of the reported purchase price. Here is a look at therapeutic-focused acquisitions (valued at >$10M) over the last seven years that have >50% of the value tied to an earnout*: 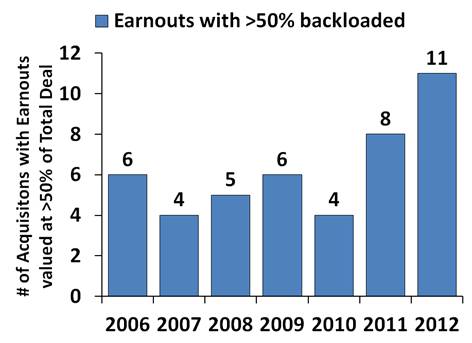 Some acquisitions last year had 90% of the buyout tied to regulatory or sales hurdles in the future. For example, in 2012 Dainippon Sumitomo bought Boston Biomedical for “$2.6 BILLION”, according to headlines. However, Boston Biomedical received $200M up front and only gets the remaining 92% if development milestones are sales targets are met in the future.  Shire (SHGP) and Acorda (ACOR) both signed acquisition deals that surpassed the 90% earnout level. Shire bought Pervasis Therapeutics for a reported "$200M" potential. According to Shire's 10-Q, the up-front payment was $2.5M with the remaining 95% ($169.5M) as potential earnouts. Acorda’s acquisition of Neuronex, was $133M in potential value, with 90% in earnouts. Stromedix grabbed headlines when Biogen Idec (BIIB) put up $576M for the Boston start-up company. The deal was 86% back loaded, with $75M upfront and $487 contingent on future R&D and regulatory milestones.

The context for the above data is that M&A volume has been more or less flat over seven years with a few spikes in 2008 and 2011. Below is a chart that shows acquisitions valued at >$10M (excludes reverse mergers, generics, OTC, device, and distribution companies – i.e. only biotech and spec pharma). There is a similar theme, albeit with a higher number by 30%, when we add acquisitions that do not have a disclosed amount, or if we add deals that are sub $10M. 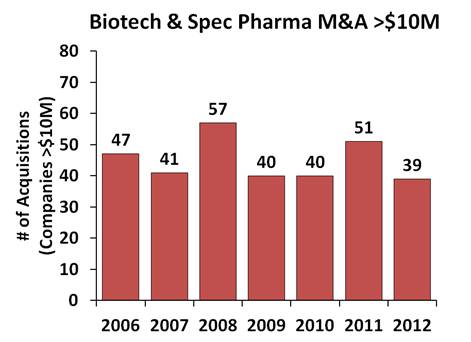 So, what other trends are we seeing? If we look at latest stage asset (lead compound), we see something that makes intuitive sense give the environment post 2008/09 – a shift to the marketed drug companies over the last few years to fill the void from patent cliffs and a de-risking of M&A away from the very early pipeline companies. (see chart below) 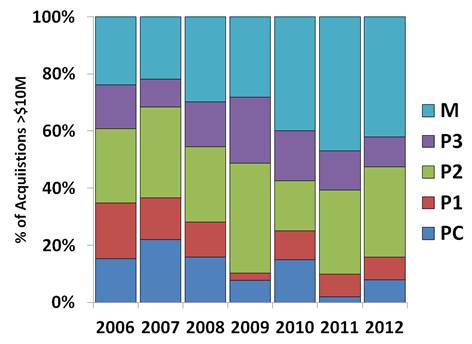 As a percentage, the Preclinical and Phase I company acquisitions in 2011-2012, as well as the percent with marketed drugs, have shifted compared to that of 2006-2007. However, the Phase 2/3 acquisitions seem to make up the same proportion across the seven years, save that of 2009 when a lot of great pipeline companies were trading at attractive valuations after the 2008 market crash.

When it comes to private companies vs public, there does not seem to be any meaningful trend. Of the 39 therapeutic acquisitions above $10M for 2012, about 60% were private companies. This is in line with the last seven years, except for 2008 where private companies accounted for less than half of the buy-outs. Again, that was likely due to the public market environment.

Are we seeing a surge in biologics acquisitions? Actually, no. The Amgen/Micromet acquisition in early 2012, the finalizing of the GSK/HGSI deal, and the Biogen/Stromedix deal are among the few biologics buy-outs seen in the last two years. As shown in the chart below, biologics actually make up only ~30% of recent M&A activity. 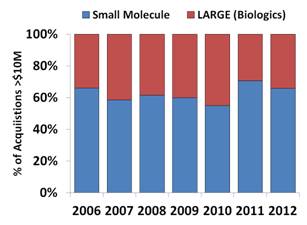 Back in 2010 we did see a surge in biologics acquisitions, but this has never reached a meaningful shift from the 60-65% range. This would imply that the buy-side strategic teams are modality agnostic on average. The numbers seen above align with that seen across the industry – the biotech universe is made of about 65% small molecule developers based on companies listed in our BIO database.

Geographically, the US headquartered targets dominated in 2012, with 82% of the companies – the largest portion in seven years. The EU companies only accounted for only 15% of the 39 acquisitions over $10M.

In terms of average deal value for pipeline companies, the Biobuck lens makes 2012 look like a great year for Phase 1-Phase 3 companies vs the average of the prior six years. The Phase 3 acquisition value surged 100% using the average mean calculation. Moving the Phase 3 needle were deals like Medicis/Valeant ($2.6B), the Boston Biomedical/Dainippon ($2.6), Ardea/AZ ($1.2B). However, when we plot the upfront values vs historic averages, 2012 looks like prior years (see 2nd chart below). 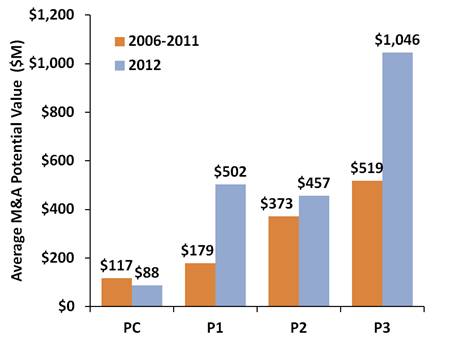 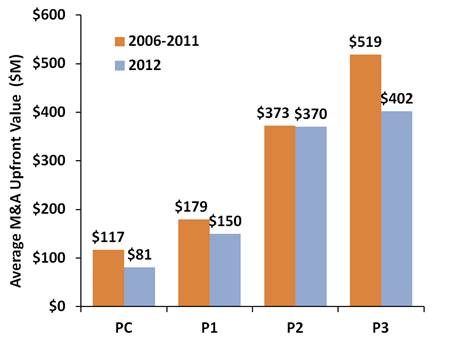 Looking to hear more about the kinds of companies Big Pharma and Biotechs are hunting for? Come hear the CEOs of Eli Lilly (LLY), Celgene (CELG), Gilead (GILD), Onyx (ONXX) and BioMarin (BMRN) talk about their strategies during Fireside chats at the upcoming BIO CEO Conference February 11-12th in New York. As the world’s largest independent conference focused on publicly traded biotechs, it is the essential event for scouting 2013’s “bolt-on” strategic targets for big companies.