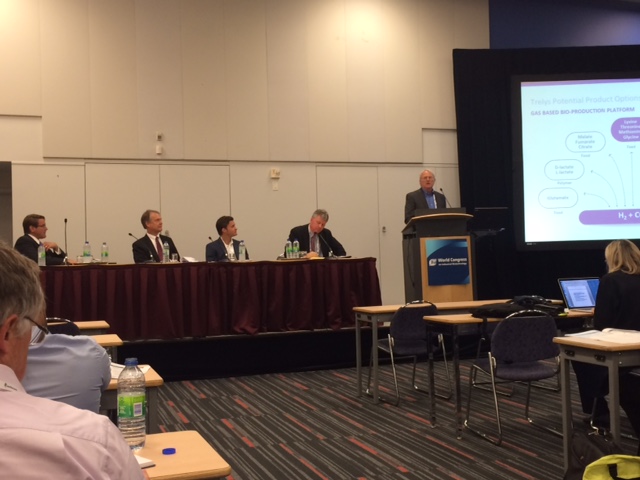 The industrial biotechnology company Trelys is focused on gas as a feedstock for biological conversions. Jay Kouba argued that we are over-utilizing agriculture and underutilizing natural gas resources. Trelys' technology converts hydrogen and carbon dioxide into a set of valuable products, especially feed products. He argued that the market demand for industrial hydrogen is quickly growing. Trelys’ technology complements corn with amino acids which costs less than the alternative soy meal and can still be nutritionally equivalent and better for the environment. The emerging application is great for such industries as aquaculture. According to Kouba, fish food is made out of fish product, which essentially means we are stripping a valuable resource (fish) from our oceans for feed. We are focusing on underutilized and growing industrial hydrogen feedstock; Strong IP; methanogen conversations with broad product reach.

Liquid Light makes everyday products with CO2: the lowest-cost carbon feedstock. Dave Law opened by commenting on his company’s technology. Liquid Light captures carbon dioxide from industrial sources and then converts it into chemicals for the use in everyday products. He argued that it is a huge market, with strong intellectual property, and it’s a process that costs less and reduces the carbon footprint. Liquid Light is entering the market of ethylene glycol (large market) and speciality chemicals. Carbon Dioxide electrochemistry is Liquid Lights's Core Technology, according to Law. Electrocatalytic breakthroughs offer disruptive technology to harness carbon dioxide economically for multiple chemicals.

Dave Law concluded his remarks by announcing that as of today his company signed a technology development agreement with The Coca-Cola Company. The objective of the agreement is to accelerate the development of Liquid Light’s technology which can make mono-ethylene glycol(MEG) from carbon dioxide (CO2). Liquid Light’s approach enables more efficient use of plant material to make MEG. For example, a bio-ethanol production facility could make bio-MEG from the CO2 byproduct that results from converting plant material into ethanol. The technology has the potential to reduce both the environmental footprint and the cost of producing MEG. MEG is one of the components used to make The Coca-Cola Company’s plant-based PET plastic bottle. Their release can be found here.

Co-Founder and CEO of Newlight, Mark Herrema, spoke about how his company was inspired by carbon-capturing processes in nature to turn carbon dioxide into plastic. Newlight has developed, patented, and commercialized a carbon capture technology that combines air with methane emissions to produce a plastic material called AirCarbon™. By weight, in its most basic form, AirCarbon™  is approximately 40% oxygen from air and 60% carbon and hydrogen from captured carbon emissions.

Watch this video on Newlight’s technology behind AirCarbon™.


“Newlight’s mission is to reduce cost for resin manufacturers, brands, converters, and consumers; replace oil with greenhouse gas; and transform the role of plastics.” - Herrema

Herrema concluded by commenting on where his company is today – Commercial scale production in California; Using 9X yield in economics; and The company is launching product lines with such Fortune 500s and market segment leaders as KI, Virgin, Dell, and The Body Shop.

Enerkem, Inc. is in the business of turning MSW (garbage) into ethanol and methanol. The company started in 2000 and now has 200 employees based in Montreal. It's first commercial plant is in Edmonton, Alberta. Senior Vice President of Business Development, Timothy Cesarek provided on overview of his company's technology. 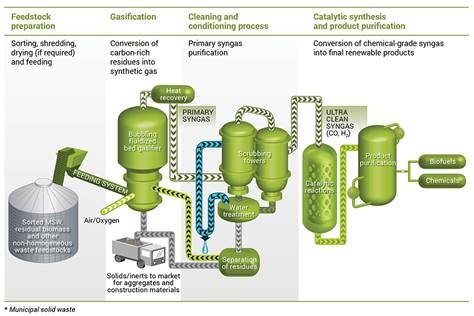 He argued that what is critical in the waste industry is the ability to handle multiple types of feedstocks. There is 1.3 billion metric tons of garbage in the world and 420 million tons of MSW. Cesarean noted that this amount would be suitable as a feedstock which measures out to 42 billion gallons of ethanol.
More on This Topic