September 21, 2009
Last week I made my first visit to our South Dakota affiliate. The South Dakota Biotech Association, formed in 2006, held its fourth annual conference on Thursday, September 17th.

I began my tour on Wednesday at Hematech, Inc.   The company, headquartered in Sioux Falls, is developing cattle that can efficiently produce human antibodies.  The genetically altered cattle will be used for the production of large quantities of polyclonal antibodies.  These antibodies are expected to help in the treatments of viral or bacterial infections, autoimmune disorders and other medical conditions occurring in humans. 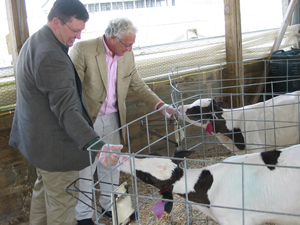 Hematech President and BIO Board member Eddie Sullivan explained the science and introduced me to healthy two-day-old calves.  Hematech is engaged in some of the most complicated and cutting-edge science in biotechnology.

Another exciting project underway in South Dakota is under way at the Sanford Research Park.  Local businessman Denny Sanford recently donated $400 million to what was previously the South Dakota Sioux Valley Health System and challenged it to find a cure for childhood Type I diabetes in his lifetime.  The newly-named Sanford Health System is busy recruiting world-class scientists to achieve this goal.

South Dakota is also home to Poet Energy.  This BIO member company has built 26 ethanol plants in seven states which produce more than one billion gallons of ethanol annually.  Chosen to partner with the U.S. Department of Energy, the company will construct a pilot cellulosic energy facility that uses corn cobs.  A significant by-product of the ethanol production is their high quality Dakota Gold protein feed.  The fact that Poet produces fuel and feed from local corn gives lie to the myth that we have to choose between the two products.

South Dakota is well on its way to becoming a leader in biotechnology.
More on This Topic