April 14, 2016
Despite showing a 1 percent net marginal decrease in biotech crop acres (for the first time in 20 years), the annual ISAAA report shows that biotech crops are still preferred by 18 million farmers around the world for the environmental and economic benefits they provide.

The International Service for the Acquisition of Agri-Biotech Applications (ISAAA) report, “20th Anniversary of the Global Commercialization of Biotech Crops (1996-2015) and Biotech Crop Highlights in 2015,” details the global adoption of biotech crops.  This year’s report showcases the global increase in biotech adoption from 1.7 million hectares (4.2 million acres) in 1996 to 179.7 million hectares (444 million acres) in 2015.

Andrew Pollock in The New York Times does a good job of summarizing key points in the report and explaining the 1 percent decline, despite the paper’s negative headline:


…the main cause for the decline, which measured 1 percent from 2014 levels, was low commodity prices, which led farmers to plant less corn, soybeans and canola of all types, both genetically engineered and nonengineered.”

Val Giddings, senior fellow at the Information Technology and Innovation Foundation, is quoted in Pollock’s piece and takes this analysis a step further in his post for The Innovation Files:


Starting from zero only 20 years ago, the growth in adoption of these seeds by farmers has been steady and steep to the point where they now saturate major commodity seed sales in most of the Americas (for corn, cotton, soy, and canola) and have established a new global standard for ‘conventional’ seeds.”

The takeaway from the ISAAA report – as well as the varying coverage of the report’s findings – is that the tools of agricultural biotechnology have become the farmer’s best friend....  at least in countries where the technology is permitted.  Pollock explains:


Efforts to expand use of biotechnology to other crops and to other countries have been hindered by opposition from consumer and environmental groups, regulatory hurdles and in some cases scientific obstacles.

‘Onerous regulation for transgenic biotech crops remains the principal constraint to adoption,’ said the executive summary of the report.”

In fact, the report estimates that “millions of farmers around the world have reaped more than US$150 billion in benefits from biotech crops since 1996.  This has helped alleviate poverty for up to 16.5 million small farmers and their families annually totaling about 65 million people, who are some of the poorest people in the world.” 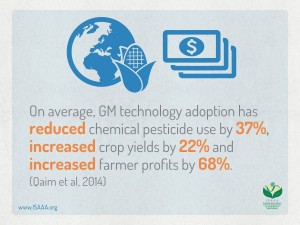 "In both industrialized and developing countries, agriculture and food production is hindered by invasive pests, disease and the challenges of climate change,” says Brian Baenig, BIO Executive Vice President, Food and Agriculture.  “Biotechnology can provide the tools – including seeds with drought tolerance, insect and disease resistance, herbicide tolerance, and crops with enhanced nutrition.”

Giddings points to Africa's adoption of the technology as a major case in point:


...that field trials are now underway in eight African countries, is of huge significance. Despite massive interference from well-fed but misguided activist groups, African nations are moving ahead to solve their own problems in ways that have massive positive implications for human welfare, economics, and the environment. These developments are worthy of attention."

Among the ISAAA report’s highlights:

*The International Service for the Acquisition of Agri-Biotech Applications (ISAAA) report, “20th Anniversary of the Global Commercialization of Biotech Crops (1996-2015) and Biotech Crop Highlights in 2015,” and accompanying materials are posted at www.isaaa.org.
More on This Topic