September 21, 2017
As CEO of a global organization, I’m often on the run. To maintain my stamina, I try to work out as often as my schedule allows. Given how proud and exhausted I am after logging in a solid hour on the weights or the treadmill, I’ve always been flabbergasted at contemporaries who can finish a marathon. For a cancer patient in his 60s to be able to achieve this … well, it simply boggles my mind. 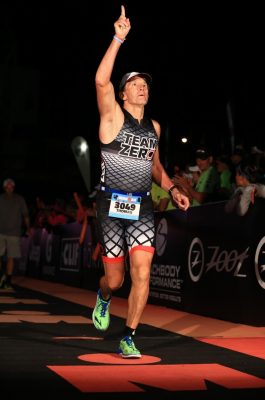 Hulsey finished the Lake Placid Ironman, one of the toughest races in the world, followed 11 weeks later by the Ironman in Kona, Hawaii. In so doing, he honored his dear friend and fellow extreme sports athlete, Bill Rollings, who lost his battle with prostate cancer a year before Hulsey’s own diagnosis. Looking back, Hulsey says the difference between his fate and that of his friend came down to one thing: early detection. Rollings missed just one year of testing, but his cancer had spread into his lymph nodes by the time it was detected. He died less than two years later.

Screening for prostate cancer is typically done using a blood test that measures levels of protein released by the prostate, which may indicate the presence of cancer when elevated. Hulsey’s prostate specific antigen test (PSA) was elevated six months after his initial test before a biopsy ultimately revealed he had cancer. But increased levels can also be caused by less serious medical conditions, like inflammation, which is why many doctors are cautious about performing potentially unnecessary biopsies.

For this reason, many in the medical community are encouraged by a new blood test that could potentially cut the need for a biopsy by almost 50 percent. The IsoPSA test works by identifying molecular changes in the PSA protein, as opposed to current tests that evaluate the protein’s concentration in a patient’s blood. Cleveland Clinic researchers say the new test can detect prostate cancer more precisely by distinguishing cancer from benign conditions and by identifying patients with high risk factors.

Once diagnosed, prostate cancer can be treated with a prostatectomy – where doctors remove the prostate – or with radiation, chemotherapy, or hormone therapy. However, one of the most exciting new frontiers for prostate cancer treatment lies in the field of immunotherapy.


September is Prostate Cancer Awareness Month.  The American Cancer Society (ACS) reports that one in seven men will be diagnosed with prostate cancer during his lifetime. It’s the second most common cancer in men behind skin cancer. Approximately 161,000 new cases of prostate cancer were reported last year, but thanks to advances in biotechnology treatments and diagnostics, survival rates are way up – with a 15-year survival rate of 96 percent.

In recent years, the medical community has debated when men should be screened. Until about 2008, most doctors encouraged annual PSA screening for men 50 and older. Then, in 2009, two controversial clinical trials published in The New England Journal of Medicine led to confusion about whether the test reduced mortality rates. As a result, groups like ACS recommended doctors share relevant information and let patients decide if they want to take a PSA test. Now, the results of two major trials of random PSA testing in both the United States and Europe conducted by a biostatistician at the Fred Hutchinson Cancer Research Center have revealed a 27 to 32 percent lower risk of prostate cancer deaths with screening. According to researchers, the better outcomes were primarily a result of early detection.

Tom Hulsey was more inclined to be tested because he had a family history of prostate cancer. Even after his diagnosis, he described himself as the typical male who didn’t want to talk about health issues. He has since come around and is now sharing his message that prostate cancer doesn’t discriminate. The disease took his friend’s life, and he believes it could have taken his had he forgone screening.

We in the biotechnology community are inspired by this Ironman’s story. And we are proud of the Ironmen and Ironwomen working in biotech laboratories across the country to make sure the race to beat prostate cancer is won.