October 5, 2011
IPO plans for Quark Pharmaceuticals were officially put on hold last week as markets continue to drop and investors shy away from risk. This is the fifth IPO withdrawal since June. Ambit, Agendia and Clarus cited market reasons for their withdrawals, and Advanced BioHealing sought a higher valuation exit via acquisition. Only one biotech IPO, Horizon Pharma, has made it out in the last six months. Of the nine biotech IPOs so far in 2011, five are down more than 30% and only one was able to raise the original amount filed for.

All this points to an icy fall season for the IPO window, but is the window really shut? If conditions follow the last IPO window of 2004-2007 , the answer is “no”. In the chart below, we line up accumulated IPOs by month for the IPO window 2004-2007 and the current 2009-2011. What we see is almost a mirroring of what took place five years ago. After two years into both IPO windows, we have exactly 29 IPOs.

It will be interesting to watch the 19 U.S. biotechs with current S-1 filings. Will they bring about a surge in IPOs like the end of 2006? Maybe, but it will certainly be tougher this time around. Back then we were not following a “Credit Crunch”, nor were we in the midst of a “Debt Crisis” (back then the U.S. was still AAA rated and Greece could pay its bills). Global macro dynamics will  likely continue to define biotech stock and IPO performance over the coming months. 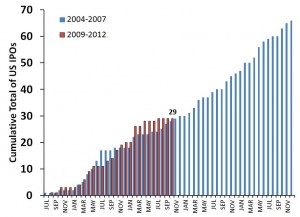 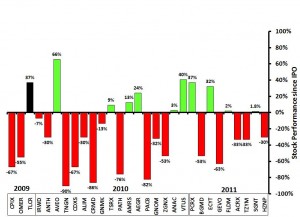