December 5, 2013
Biotech stocks hit an all-time high this week, driven by strong performance among large cap sector leaders with strong product portfolios. A common benchmark for the sector, the NASDAQ Biotechnology Index (NBI) has outperformed the S&P 500 by a factor of over 2X. The NBI is up 61% year to date, compared with 26% for the S&P 500. We'll be discussing this strong performance in New York this February at the BIO CEO & Investor Conference, where our opening and closing plenary sessions will discuss the future of the public markets. 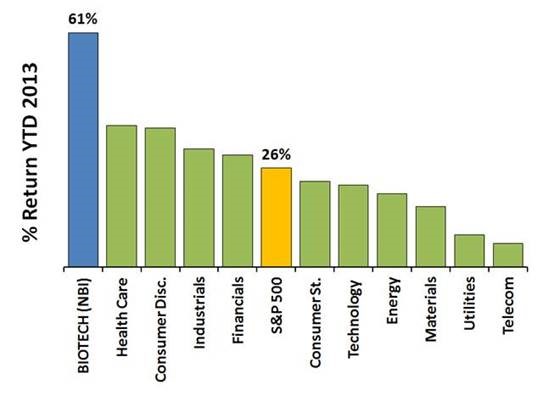 Some have drawn comparisons to the ’99-2000 bubble, when the NBI climbed an astounding 157% between November and March to a high of 1584, only to decline 45% in March and April. This comparison falls short for several reasons. The recent NBI gains have been much more smooth and steady than the sharp spike in valuations we saw in the run-up to the 2000 peak. PEG (price/earnings growth) ratios are not at the exorbitant levels that they were back in the bubble days. The increased valuations are backed up by strong earnings growth. 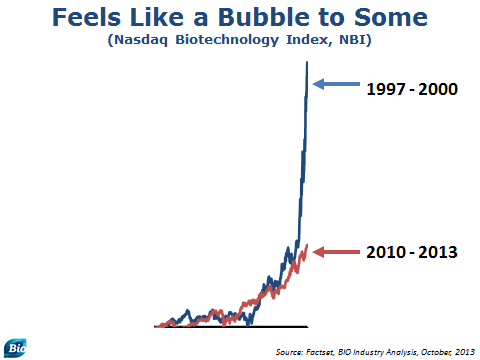 The NBI is a weighted by market cap, meaning that much of the recent performance has been driven by large-cap biotech leaders with valuations that often put them in Big Pharma territory (and the big analyst followings that come with it). These companies are doing well because they have great product piplines and strong fundamentals. Industry leaders Gilead, Biogen Idec, and Celgene comprise over a quarter of the index.

Gilead (GILD) recently announced promising Phase III trials results for a promising new HCV treatment. Biogen Idec  (BIIB) shares soared early this year when it received FDA approval Tecfidera, a new MS treatment. New and expanded product approvals have helped Celgene (CELG) nearly double in value this year. The FDA approved Pomalyst to treat patients with advanced multiple myeloma whose disease progressed after treatment with multiple other drugs. Another Celgene myeloma drug, Revlimid, received EU approval, and an additional FDA approved indication to treat mantle cell lymphoma. If you haven't seen it yet, Celgene CEO Robert Hugin’s fireside chat at our last BIO CEO & Investor Conference is well worth a watch. We'll be joined by other leading biotech CEOs in February, including Richard Pops of Alkermes (ALKS), whose shareholders have seen returns of over 100% this year.

Science and technology are also more advanced today than in the 2000 bubble, including new tools with antibodies, gene therapies, and RNA solutions. The executives running these companies are now more experienced with clinical development. That increased expertise has also spilled over to Wall Street, where firms have become much more sophisticated at analyzing and valuing product pipelines in a way that wasn't possible 15 years ago. This allows capital markets to respond to clinical trial results, approvals and other company news with efficiency.

What does all this mean for the biotech sector heading into 2014? Join us in February to hear from leading CEOs on what investors should watch for next year. Early bird rates end December 16th, so be sure to register today to take advantage.
More on This Topic