August 2, 2012
As drought conditions worsen across the midwest, drought-tolerant corn products are being put to the test.  Because of that new technology, it isn’t causing all farmers to lose hope in the face of this summer’s drought. 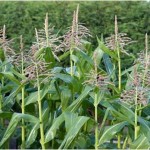 For the past several years, seed companies have been developing corn that can survive the dry weather. Now some of those crops are actually in the ground and farmers are waiting to see just how well they grow.

“I think it will be a good year even if we don't have those 200 bushel yields,” South Dakota farmer Jared Questad said.  Questad not only farms but is also a seed dealer for Pioneer Hi-Breds. And one of the products in his field right now is called AQUAmax.

“We have hundreds of trials of AQUAmax products in South Dakota this year,” Pioneer Hi-Bred Area Manager Alan Scott said.  Scott says Pioneer spends $3 million every day in researching new technology to make crops perform better in the field. When it comes to drought-tolerant corn this summer is a realistic test for the brand new product.

Monsanto is also developing its own product called DroughtGard which is a hybrid corn that can withstand dry weather. The product won't be available commercially until next year, but right now it's being tested in 68 locations in the state, including a farm near Parker.

“We might lose some of those kernels here, but if we happen to catch a rain those might go ahead and fill out,” Corby Jensen who is Monsanto’s Technology Development Manager for Nebraska and the Dakotas said as he looked at an ear of DroughtGard corn.

Jensen adds that keeping weeds and insects off plants is also important.  “It's about the whole package, eliminating weeds that can rob the soils of valuable water, better genetics, residue management, using no-till practices have been a proven way to conserve soil moisture. So, again it's about putting all those pieces together to give yourself the best chance at success possible,” Jensen said.

Drought-tolerant corn is currently being tested from South Dakota to Texas and this fall promises to bring answers to those tests.  Click here to read more about how farmers are using biotechnology to combat drought stress.
More on This Topic