We’re also urging countries that have instituted restrictions on agricultural exports to lift those restrictions. Some countries are preventing needed food from getting to market in the first place, and we call upon them to end those restrictions to help ease suffering for those who aren’t getting food.
"We’re also urging countries to remove barriers to advanced crops developed through biotechnology. These crops are safe, they're resistant to drought and disease, and they hold the promise of producing more food for more people."


As well as liberalising trade, we need to encourage increased agricultural productivity.
"Only farmers can solve the global food crisis, and to help them achieve this we need to make them more efficient.”

The problem is illustrated most clearly by a chart sent to me by Richard Hamilton, CEO of Ceres, Inc. The average yield of agricultural producers around the world (gold bar) is less than half that obtained by producers in the United States (green). 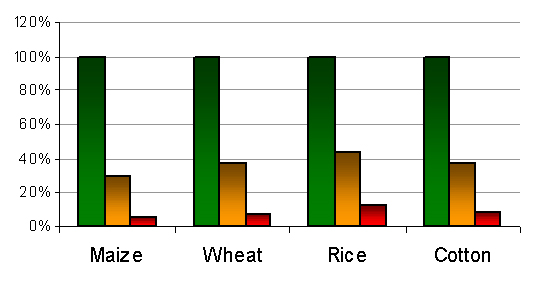 It was put most succinctly perhaps by Clifford D. May, president of the Foundation for the Defense of Democracies:

"By all means, send food aid to those who are starving. But over the longer run, Third World farmers need to be helped to grow more of their own food -- not to rely on charity from overseas.”

But what about the environmental impact of increasing agricultural production around the world. Is switching to energy crops such as switchgrass for biofuels better?

Indur M. Goklany, author of “The Improving State of the World,” doesn’t think so. On the Cato@Liberty blog, he writes:


Farmers will do what they’ve always done: they’ll produce the necessary biomass that would be converted to ethanol more efficiently. They’ll use their usual bag of tricks to enhance the yields of the biomass in question: they’ll divert land and water to grow these brand new crops. They’ll fertilize with nitrogen and use pesticides. The Monsantos of the world — or their competitors, the start-ups — will develop new and genetically modified but improved seeds that will increase the farmer’s productivity and profits. And if cellulosic ethanol proves to be as profitable as its backers hope, farmers will divert even more land and water to producing the cellulose instead of food. All this means we’ll be more or less back to where we were. Food will once again be competing with fuel. And land and water will be diverted from the rest of nature to meet the human demand for fuel.”

But U.S. farmers’ usual bags of tricks are pretty good.

A study by the U.S. Department of Agriculture and University of Nebraska, published in January in the Proceedings of the National Academy of Science, announced the results of five-year field trials for farm-grown switchgrass. The analysis shows that fertilizer, herbicide and fossil energy requirements were lower than expected based on the results from economic models. It also showed that farm-managed switchgrass grown on marginal land that is not useful for corn production outperformed natural switchgrass grown on prairie land in terms of harvest.

So yes, farmers will make individual decisions as to what to plant and grow. And energy crops will give them better options for marginal, ecologically sensitive land. And worldwide, farmers should be looking to adopt the same tools as American growers.
More on This Topic