The Case of Misplaced Mountain Magnolias

February 15, 2012
Amidst the mountains of western North Carolina rests a stand of Sweetbay magnolia trees. This hardly sounds noteworthy, but this story gets interesting. 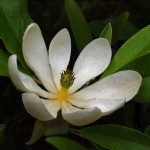 This species of magnolias wouldn't be easily confused with the much more popular ornamental varieties that are ubiquitous to well manicured southern lawns. Like their popular cousins, these scrawny trees don't belong in the mountains. They prefer coastal, swampy habitats with wet soils. They are outliers in their present location. So where did they come from and how did they get there?

Did humans plant them there for some long forgotten reason? Did birds or animals somehow drag them in? Just as with any good mystery, a team of detectives is on the case.

Jennifer Allsbrook, a high school biology teacher, founded the Magnolia Detective project to help her solve this mystery, while opening her students to the joys of biotechnology research.

The project has already garnered two grants from the North Carolina Biotechnology Center, providing a total of $16,000 to help her make biotech locally relevant to her students. She has also landed grants from ING and Toshiba foundations to help equip her lab and propel the research. 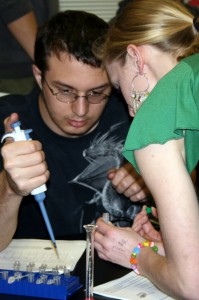 Allsbrook, who holds a B.S. from Appalachian State University and a Master of Life Science degree from the University of Maryland, said her tree-tracking exploits started a couple of years ago when she was looking for a way to incorporate more biotechnology into her teaching.

To help solve this mystery, Allsbrook recruited Andrea Wolfe, Ph.D., a scientist at the Ohio State University to teach her how to genetically analyze the magnolias as a means of tracing the trees' lineage.

“She uses a technique called ISSR DNA fingerprinting,” said Allsbrook. “I’d never heard of that before. But it’s amazing. It’s so exacting you can identify individuals within a population.”

Allsbrook has collected leaves and numbered specific trees so that she and the students can continue to compare DNA fingerprints. This, in turn, opened the door to the relatively new specialty called phylogeography – the study of the historical processes that may be responsible for the contemporary geographic distributions of individuals.

The team plans to expand the project to analyze Sweetbay magnolias throughout the North American range. Through continued research and discovery, the Magnolia Detectives might learn where those trees came from - and just maybe how they got there.
More on This Topic