Celebrating the Overlooked Origin of a Miracle Vaccine

June 18, 2013
Ever heard of Maurice Hilleman? Chances are that you haven’t, but he may be responsible for saving your life and the life of your kids and grand kids. 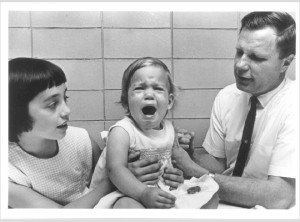 Hilleman's mumps vaccine being given to daughter Kirsten while half-sister Jeryl-Lynn looks on, 1966[/caption]

Hilleman truly is one of the unsung heroes of the vaccines industry. He invented the measles vaccine estimated to have saved at least 100 million lives. Today, 95 percent of children in the U.S. receive the MMR — the vaccine for measles, mumps and rubella invented by Hilleman. During his 30 year career at Merck, Hilleman devised or improved more than 25 vaccines, including nine of the 14 now routinely recommended for children.

After his death in 2005, researchers credited him with having saved more lives than any other scientist in the 20th century.

It all started fifty years ago this spring, Hilleman’s daughter woke him up in the middle of the night complaining of a sore throat, which would turn out to be mumps. Hilleman knew that mumps could render a child deaf or otherwise permanently impaired so he took action immediately.

Ironically, the Food and Drug Administration had granted the first license for a vaccine against measles previously that year. Much of the early work on the virus had been done in the lab of John Enders at Boston Children’s Hospital, but the vaccine produced rashes and fevers.

Dr. Hilleman spent the next four years refining the vaccine, eventually producing the much safer strain that is in use today. In 1971, Hilleman combined the vaccines for measles, mumps and rubella together to make M.M.R., replacing a series of six shots with just two.

Near the end of his life, Hilleman’s dedication to safety and effectiveness came into question when a journalarticle linked the MMR vaccine with autism. Many children were put at risk by this fear-mongering as parents became concerned that vaccines would lead to developmental delays and chose not to immunize. These unimmunized children are now, predictably, prone to measles.

Multiple independent studies eventually demonstrated that there is absolutely no link between MMR and autism, and the lead researcher’s work was widely discredited. In 2010, he was stripped of the right to practice medicine, and the journal retracted the 1998 article.

A global campaign to eradicate measles and rubella vaccinated a billion children in this century, preventing 9.6 million deaths from measles alone, for less than $2 a dose. The CDC has publicly stated that we are “on the verge of setting a target date” to eradicate the disease.

Before measles immunization, measles was a highly contagious illness that caused approximately 48,000 hospitalizations each year in the U.S. and resulted in 7000 children with significant seizure disorder, and left roughly 1000 children with permanent brain damage. With immunization, these rates fell dramatically in most of the developing world, and by the year 2000, indigenous measles had been nearly eradicated in the U.S.

In this country, the strain that Dr. Hilleman collected from his daughter that night in 1963 has reduced the incidence of mumps to fewer than 1,000 cases a year, down from 186,000. Characteristically, he named it not for himself but for his daughter Jeryl Lynn Hilleman, who is now a financial consultant to biotech start-ups in Silicon Valley.

Hilleman’s story is a good example of the entrepreneurial spirit in action and the power an individual can have to profoundly impact public health. His story represents the foundation that the biotechnology industry was built upon. The long term impact of his contributions represents the enormous potential that the work being done in labs across the country today can have on patients in the future.

We celebrate the legacy of Dr. Hilleman and his efforts to reduce suffering and save lives through his irascible dedication, entrepreneurialism, and perseverance.
More on This Topic