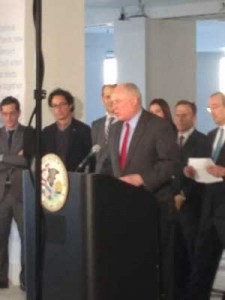 The not-for-profit incubator, called MATTER, was a priority in the Governor’s 2014 State of the State address. The project is part of Governor Quinn’s funding package, administered through the Illinois Department of Commerce and Economic Opportunity (DCEO), that consists of a $2.5 million state investment and a loan of $1.5 million. Business leaders are also raising additional funds from corporate sources.

Together the Quinn Administration and the Illinois Innovation Council, which was created by the Governor in 2011, have led significant progress in fostering the growth of the state’s technology sector. The Governor previously invested $2.3 million to help launch 1871, now one of the nation’s leading centers for early-stage digital technology companies. The state also invested $1.7 million to build the HTI, a new healthcare R&D facility located in the Illinois Medical District.

Illinois has the third-largest healthcare community in the U.S., and Chicago boasts the nation’s largest concentration of doctors. The state is home to leading national healthcare organizations, global biopharmaceutical, medical device, health IT, distribution and health insurance companies, leading research institutions and teaching hospitals, and a dynamic startup community.

The life science industry in Illinois has a $98 billion economic footprint. For entrepreneurs building healthcare technology businesses, the Chicago area has one of the world’s highest concentrations of potential resources, but until now the community has not had a central focal point.

Since taking office in 2009, Governor Quinn has spearheaded and supported numerous programs that have increased Illinois’ economic, scientific, and technological output through programs such as the Illinois Angel Investment Tax Credit and Illinois Small Business Job Creation Tax Credit. He further demonstrated his support for bioscience and other innovative industries by establishing the Illinois Innovation Council to recommend programs and initiatives to expand and retain entrepreneurship and innovative research.
More on This Topic