Phase one of the China trade deal has been inked. For farmers across rural America, China’s commitment to purchase more agricultural products like corn and soybeans as part of this agreement is a positive sign.

But, as we look closer at the details, China’s promises around products of agricultural biotechnology and how it will fix its broken technology approval process is still somewhat unclear.

As a quick refresher, due to the size of the Chinese market—and the billions of dollars of agricultural products the country historically purchased before the trade dispute interrupted commerce—technology companies often delay commercialization of new products in the United States and other countries, including biotech crops, until they have been approved in China to avoid trade disruptions.

The problem is China’s regulatory process for these new technologies is asynchronous. First, before a crop can even be considered for review in Asia’s largest country, it must be approved by another country such as Canada or the U.S. This approach is an outlier in the rest of the world and has prevented nearly $15 billion in sales, according to a 2018 report. 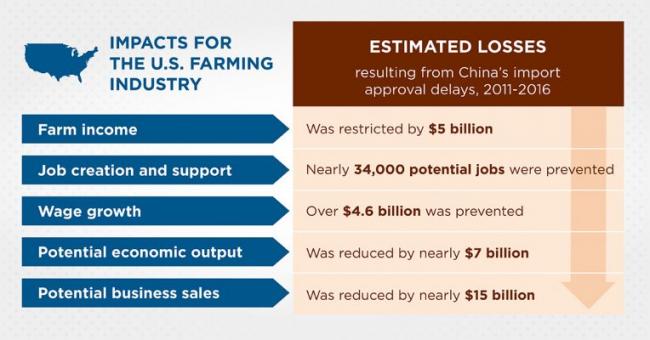 As noted in a Reuters piece, China has promised to speed up its review of agricultural biotech products to no more than two years, but it’s still unclear if the products will first need to be approved in another country.

“What we really need to see is how China implements this,” said Matt O’Mara, BIO’s Vice President of International Affairs.

“The deal with China will tear down market barriers and pry open vast new markets for American beef, pork, poultry, seafood, soybeans, rice, dairy, infant formula, animal feed, biotechnology, and much, much more. This is an incredible success for our entire country, and it was your fortitude, your perseverance, and your devotion that made it all possible.”

Following the news of the deal signing, BIO’s Jim Greenwood noted that this “phase-one agreement is an important first step.” He went on to note:

“Our trade relationship with China is vital for America’s farmers, our scientists and our entrepreneurs. We must build on this momentum to ensure we have the type of 21st Century agreement with China that is balanced, enforceable and reflective of key sectors of America’s economy and our future.”

So, what is the deal with China and biotech? We’ll watch for  the tangible changes as China implements this phase-one agreement, as outlined in this fact sheet from the U.S. Trade Representative (USTR).

However, BIO will remain vigilant in working with USTR to make sure a phase two agreement addresses the systematic changes needed in China to provide a predictable, transparent system.