November 11, 2010
Joseph DiMasi and his team at Tufts University published a paper earlier this year in Nature’s Clinical Pharmacology & Therapeutics journal that contains some interesting data on clinical trial success rates. The published data are relevant to biotech investors and business development professionals in that published industry data for clinical outcomes can make a significant difference on the overall valuation of a company. These probabilities can also have a meaningful impact on the ability to attract additional financing as company projects advance in clinical phase. One of the core valuation methodologies for biotech investment is to risk adjust projected top line revenue prior to discounting cash flow for NPV.  A difference of a few % can shave off millions of dollars in corporate valuation. Thus, using the most accurate and up-to-date probability data is critical.

With that as background, imagine the implications of a key finding in the paper:  large molecule drugs (Biologics) have twice the success rate of small molecule drugs. In fact, the chance of moving from Phase I all the way to FDA approval was 32% for large molecules and only 13% for small molecules. To see the difference between the two at each phase transition, see the table below. 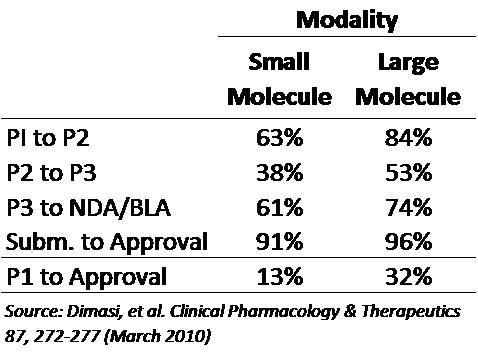 This analysis focused on the top 50 Pharmaceutical companies’ clinical candidates and the products they in-licensed. Small biotech companies that champion their lead compounds independently are not included in the data. As the authors point out, a bias might result from the inclusion of in-licensed compounds as opposed to all compounds in development by all companies. This subset of the data contains vetted compounds in the analysis, as Big Pharma screens hundreds of candidates before opting to in-license. Furthermore, some of the compounds are in-licensed after a Phase 1 or 2 successes, thus entering the dataset largely because they have already passed a proof of concept. It would be interesting to find out the success rates be for the un-licensed biotech compounds. Perhaps a future study will analyze that group?

The paper references sources that indicate approval rates (Phase 1 entry to FDA approval) had been near 13-20% for decades, and their current report, with 16% (for “in-house” Pharma drugs 1993-2009), reinforces this number.  That number jumps to 27% for the in-licensed drugs, but again, note the caveats above when plugging these numbers into your spreadsheet models.

The 16% number seems to hold steady when comparing two time periods for clinical start dates, 1993-1998 and 1999-2004, to approval by 2009. Even the phase transitions are essentially the same. However, there are diverging success rates when the compounds are broken down by therapeutic or disease area. Potential explanations for these differences (for example, cardiovascular with lower success rates than immunology) are outlined in the paper.
More on This Topic