July 22, 2015
The birth of biotechnology did not begin with the discovery of recombination, nor genes; we have actually been relying on it for thousands of years in agriculture. It all started with a question: Which crops are the best and how can we get more of them? Ancient farmers took the best crops and continued to produce them after every harvest; they did not have a scientific term to describe their actions, but they were essentially manipulating the genetic structure of their populations of crops through a process now called selective breeding—taking the best crops, the most “fit,” and passing their genes on to the next generation.

We are still asking the same questions, but now we have the tools to achieve the growing demand for food for the increasing population, thanks to genetic modification. Some people cringe hearing that word, but when you break down the technique you can see how ag biotech is a reliable way to make plants less susceptible to disease, pests, or drought.

For more than 10,000 years, humans searched to perfect agricultural practices to increase crop yields, improve nutrition and enhance taste; scientific advancements have given us tools to speed up this process.

In 1865 the study of genetics was born, Gregor Mendel’s pea experiments were the first to demonstrate the transmission of heritable material—now known as genes.  A century later, Watson and Crick’s experiments revealed the double helix structure of this heritable material, DNA, which is naturally composed of phosphate groups, sugars, and four alternating nitrogenous bases (A,T,G,C); this language is shared and understood by all living things. Just two decades later, Stanley Cohen and Herbert Boyer discovered a method to insert and delete certain genes with recombinant DNA, marking the start of modern biotechnology.

While science was rapidly evolving so was agriculture. By the 1700’s, farmers began cross-breeding crops by taking the pollen from one plant and pollinating another, like rutabagas for example (cross between turnips and cabbages). Then by the 1940’s plant breeders used chemicals or radiation to induce mutations, genetic changes, to obtain seeds with enhanced characteristics like sweetness or the bright colors in the red grapefruit. However since the discovery of recombinant DNA, scientists have been able to cut and paste genes without the use of radiation or waiting generations to acquire the desirable traits using modern gene editing techniques. In 1996 the first tested, reliable and stable biotech crops were available for commercial planting, and since then, scientists have created modified corn, soybean, papaya, cotton and canola.

The most common gene editing technique uses agrobacterium, the most studied bacterium in its genus and known for its accurate DNA transport skills, which has the ability to carry genes from one plant to another. These genes are never genes from animals, which is a common misconception about GMO crops. Once the targeted gene, for example a gene resistant for a certain disease, is placed into the plant and the agrobacterium exits, the enhanced crop goes through extensive research for effectiveness and safety, as well as approval by regulators before it can be grown on farms.

Hopefully this narrative clears up any questions you have about the science behind genetic modification, and how thousands of years of agricultural experimenting as well as scientific innovation has lead us to this remarkable technique. Check out the infographic which also teaches how to create biotech seeds! 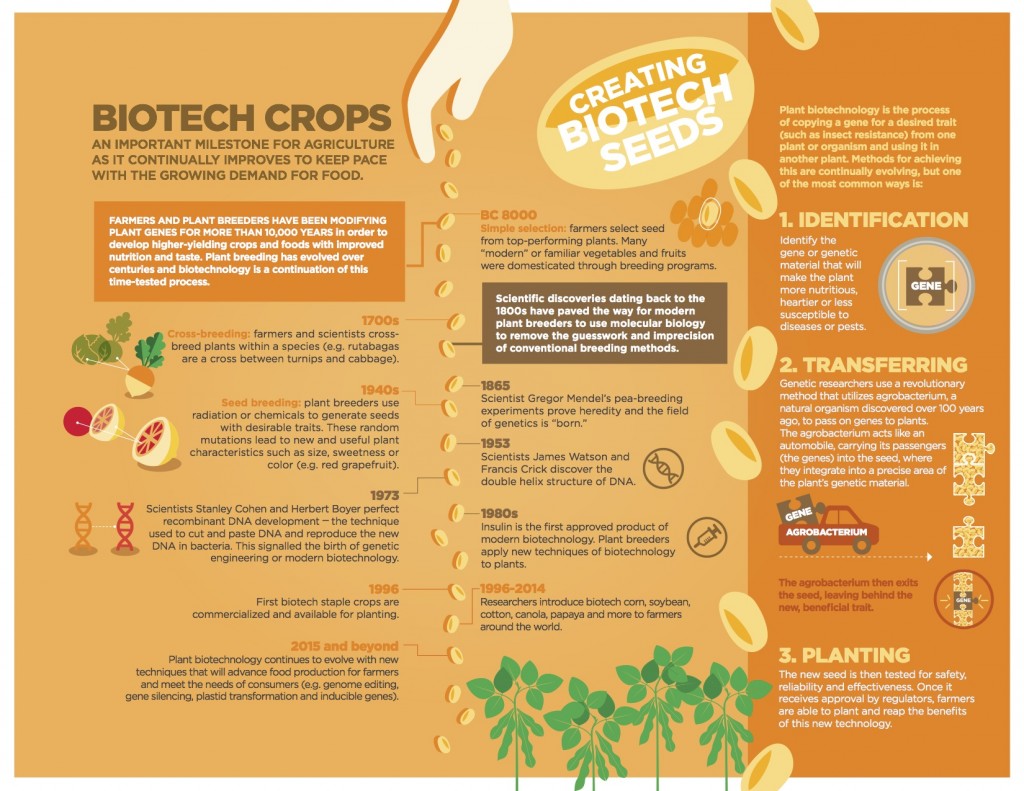