June 17, 2014
The Nasdaq Biotechnology Index (NBI) has been on a wild ride in 2014 with a 20 percent gain in the first two months, a 24 percent drop from late February to mid-April, and a rebound of 16 percent off April lows by early June. This recent sell-off follows a 130 percent gain over the last three years and the debut of 100 biotech IPOs, leading some investors to ask if the recent sell-off is the start of a bubble bursting.

Indeed, the biotech sector has been hot for the last couple of years, but there is very little evidence to support that biotech has been forming a bubble ready to pop.

Valuations of large-cap biotech companies, which account for the majority of the NBI returns, are not anywhere near bubble territory. The average large cap price to earnings ratio (P/E, based on 2014 earnings estimates), is at 20, below a ten year average of 24. With the S&P500 trading at 15x future earnings, biotechs appear to be trading at a reasonable multiple to earnings.

When we normalize the P/E for growth expectations, by dividing by the future growth rate, the large cap biotechs appear reasonably valued compared to historic levels. Currently, the P/E/G ratio is below 1.0, a level that biotech has been close to since the financial crash of 2008. If there was a bubble, this level would likely be far above 2.0, as it was fifteen years ago during the tech/genomics bubble.

This implies investors are paying for solid growth resulting from positive Phase III studies, FDA approvals, and strong product launches, rather than speculation or hype. New products from biotech are revolutionizing treatment for many illnesses, creating new value for the healthcare system – and shareholders. Recent success stories that have contributed to the rising interest in biotech include Gilead’s Sovaldi, Biogen’s Tecfidera, and Pharmacyclics’ Imbruvica. 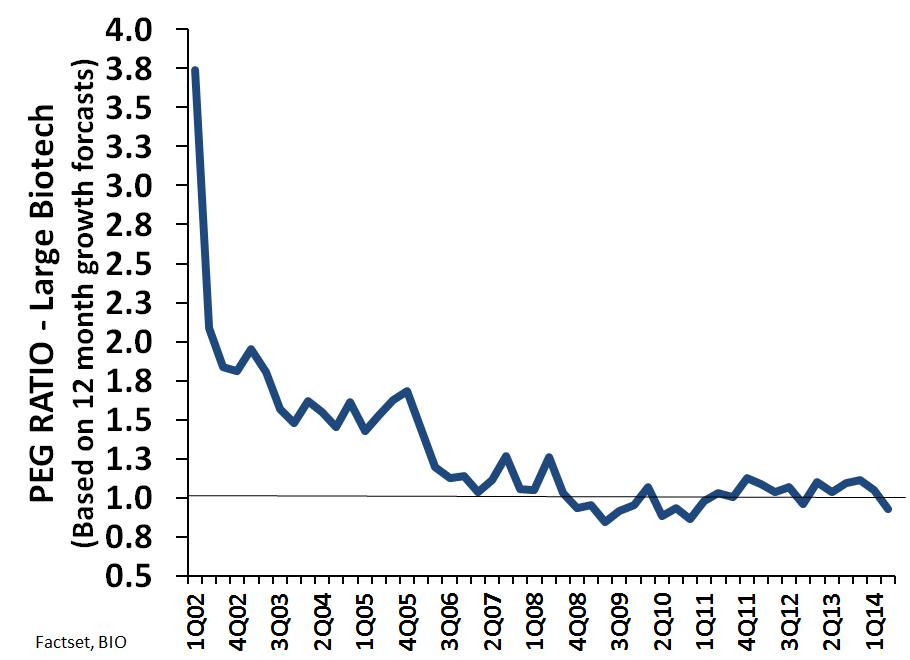 Turning to the supposed frothiness in the IPO market, consider we had only 33 US biotech IPOs during the four year period 2008-2011. For many years, the majority of venture backed biotech companies in the US had to remain dependent on venture dollars with the low likelihood of a public exit and a shrinking number of pharma buyers for M&A.  This created a backlog of private, emerging growth companies starved for capital. Many private companies with positive clinical data and new approaches to treating disease were ready for public ownership. By 2013, the long wait was finally over. On the heels of strengthening equity returns for large biotechs and the passage of the JOBS Act, we finally saw the IPO window open. The backlog of companies exiting created a surge in IPOs that at times felt like drinking from a fire hose for many analysts, but that does not qualify it as a bubble.

Investors are now excited about the prospect of owning new companies, many of which are companies that public investors are learning about for the first time in S-1 filings. Part of the returned interest is also based on change at the regulatory level. A large study of institutional investors conducted by BIO found that ~70 percent of investors believe there has been material change in the way that the FDA weighs the risk/benefit analysis when deciding whether to approve a new drug. Investors also recognize that today’s industry leadership is much more experienced now than a decade ago. Back in 2000, during the tech/genomics bubble, the industry was still in its infancy and the number of clinical programs that management had taken from bench to clinic was small in comparison to today.

All of these factors suggest that what we are seeing is not a bubble. Rather than speculation, strong earnings growth, scientific breakthroughs, an improved regulatory environment, and a more mature industry have driven the strong sector performance and increased investor appetite for biotech IPOs over the last two years.
More on This Topic