May 25, 2016
More and more consumers are demanding sustainable plastics and greener personal and household care products. In order to meet this demand, one biotech startup, Anellotech, is focusing on producing cost-competitive renewable chemicals from non-food biomass. To meet this production, the company has developed an efficient and eco-friendly thermal catalytic process for converting non-food biomass into aromatics.

These bio-based aromatics, chemically identical to petroleum-based aromatics, are used to make plastics such as polyester (polyethylene terephthalate or “PET”), polystyrene, polycarbonate, nylon and polyurethane that ultimately are transformed into consumer goods such as beverage bottles, clothing, footwear, carpeting, automotive and electronic components, and more.

Anellotech's technology has opened doors to a whole new market - cost-competitive biobased aromatics. IHS Chemical Week's Rebecca Coons covered the company's recent milestone and how it may lead to the commercialization of cutting-edge biobased products:


“Up until this point, no one has really conceived that you could make a cost-competitive biobased aromatic,” says David Sudolsky, president and CEO of Anellotech. “People have been working to develop bio-para-xylene (p-xylene) for years, and no one has been able to get a commercial plant funded because of process economics. If you’re starting with sugar or require several process, we think it’s very difficult to be cost-competitive.”

Unlike many renewable chemical firms that use finicky fermentation processes, Anellotech’s Bio-TCat thermocatalytic, single-step process converts lignocellulosic biomass to benzene, toluene, and p-xylene (BTX) in a fluidized-bed reactor. Biomass is thermally decomposed to form pyrolysis vapors, which are converted into the desired aromatics... 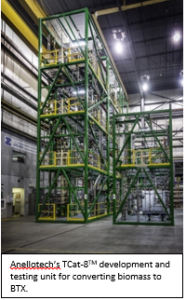 
“Half the brain power is coming from R&D powerhouses,” Sudolsky says. “We’re not trying to do everything on our own.”


“By leveraging this [experience], we can develop things faster and more efficiently and, equally important, progress more rapidly down the cost curve,” Sudolsky says.

Anellotech plans to license its technology rather than try to build, own, and operate their own plants—a daunting prospect considering the scale needed to be meaningful in large petrochemical markets, like p-xylene and benzene...

Anellotech is now exploring opportunities for its benzene stream, and polystyrene packaging, detergents, and nylon are all potentially attractive prospects. And because Suntory is not a chemical company, Anellotech is still looking for an appropriate operating partner, Sudolsky says...

Low oil prices have tempered the outlook for biobased chemicals, but the momentum Anellotech has built over the last few months has made Sudolsky optimistic:


At current oil prices, “we can be cost-competitive, but you don’t make a lot of money. But the bottom line is what the market is doing.”

BIO encourages you to read Coon's piece in its entirety.
More on This Topic