A Discussion on Value at #BIF17

October 18, 2017
In a recent op-ed, BIO President and CEO Jim Greenwood wrote about a promising trend within the health care system, one that rewards value rather than volume. As he noted, “This is the future, where there is less focus on the number of tests a patient receives and more focus on whether a patient’s health is improving.”

To ensure that future innovative cures and treatments are accessible and affordable to patients, it is incumbent upon policymakers and all stakeholders — drugmakers, insurers, pharmacy benefit managers, and others — to embrace a value-based pricing model for prescription drugs.

This was the topic of a panel discussion held during the annual BIO Investor Forum, in San Francisco, California. The conversation was moderated by Amran Gowani, a writer and senior editor for BioCentury. Sitting on the panel were: 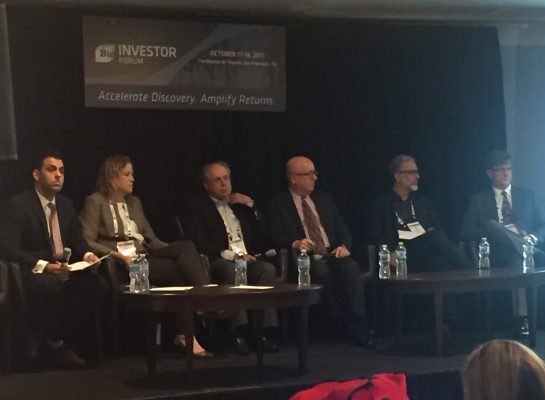 Speaking about the last 18 months in the biotech sector, Biondi stated that “the level of innovation and transformative treatments that are coming largely from biotech and innovative pharma companies is quite remarkable. Positive note is you’re seeing incredible success, at least in innovative therapies.”

Dr. Dudley agreed, saying, “I would echo the reality that there have been some incredible innovations … Definitely there has been an enormous amount of progress made.”

However, as Aitken noted, “We haven’t seen a lot of concrete progress about this broader issue of the value of medicines and the affordability of drugs. … We haven’t seen legislative change. We haven’t seen payers come out with any, what I would call, left-turns in terms of their approach to this issue. And while we’ve seen some steps from manufacturers, including Novartis with its CAR-T, those are still few and far between.”

One reason for a lack of greater action on value-based pricing is outdated federal rules. As Jim Greenwood has previously noted:


“Over the years, policymakers have adopted several policies designed to protect patients and taxpayers, such as the Medicaid ‘Best Price’ rule and restrictions on communications between drugmakers and payers. These policies may have been appropriate for the old payment model based on volume or consumption, but they also act as barriers to a value-based approach.”

That is why the Council for Affordable Health Coverage unveiled a set of consensus reforms that include changes to federal law that would encourage – rather than impede — value-based pricing. But there are other challenges to address as well. For example, it can be difficult tracking patient outcomes to determine whether a medicine is delivering its promised value.

Biondi noted, “I think there is a real commitment to try and generate that information because we believe in the value of what we are producing.” Dr. Robbins agreed, adding, “Patient reported outcomes are studied early on in our clinical trials. We are building in endpoints like that in our clinical trials. … We are all thinking about that.” Aitken mentioned that payers are increasingly looking for patient outcome data and real-world evidence as well, recognizing there is still more to do.

“Potentially the digitization of the [health care] records will help,” said Biondi, “and the ability to take that information and actually see what is happening in the real world. As an industry, we are super excited because we can show that we don’t have to run some incredibly expensive trial … but look at the impact of what is happening in a real setting.”

Panelists discussed other innovative ways to help patients and payers afford the cost of new cures and treatments, such as spreading out the cost of one-time curative treatments over a span of years.

The conversation reflects the biotech industry’s ongoing commitment to ensure patients have access to new cures and treatments that are affordable. As Jim Greenwood recently noted and today’s panelists agreed: Value-based pricing will need to be at the center of this important effort.
More on This Topic