October 18, 2016
Over the last few years, we have seen significant consolidation among the large drug manufacturers, with both franchise swapping and mergers of equals – but what is the impact on small biotechs?

At the BIO Investor Forum, (held at the Westin St. Francis in San Francisco today), a panel session moderated by Matthew Hudes, Chief Executive Officer of bdlBiologx, set out to answer that very question. The panelists, all seasoned industry veterans, came from a range of vantage points:

To summarize, the panelists argued that large company M&A has not negatively affected small company acquisitions as company strategies and the funding ecosystem is more diversified than it has been in the past.


For situations in which the buyouts are more bolt-on in nature, the recycling of freed up investment cash actually creates opportunity. On the other end of the spectrum, many of the large specialty pharma and generic swaps seen in 2014/15 have little impact on asset hunting in the innovation space. Even after all the shuffling around at large companies, the demand side still looks strong to these panelists.

Looking at the Medivation deal alone, there were four bidders that did not get the prize. So that is four companies with ~10 billion in cash ready to deploy. There is also an increase in bidders from prior years as biotechs have accumulated their own cash war chests, likely to be put to use in bidding for highly differentiated products.

To the extent that we may not get a record volume M&A year for small biotechs in 2016, (see chart below), another reason was put forward: the stock market. As the stock market has corrected to the downside since late 2015, insider owners and board members of small public biotechs have been reticent to sell at bargain prices. Matthew Roden calls it a “Bid Ask problem” that may suppress the interests of one side of the negotiating table as they believe the market valuation drops are largely a side effect of macro-level or industry-level drops in price.  If a company that was trading at $500M in 2015 is now near $250M with no significant data cards flipped, that incentivizes the buyer but gives the owners pause.

Some large company M&A may actually be beneficial as large companies divest and refocus their therapeutic pipeline and commercial operations. In a way they are doubling down in franchise areas. So, if you are developing a product in a certain space you may have lost one bidder at the table but those remaining may have more cash ready to put to work in their area of interest. A few panelists argued that this may actually help non-oncology areas that may be a strategic focus for a certain pharma.

The good news for small biotechs is that acquisitions are getting done at earlier stages. Scott Brun, who now works on the strategic side for external innovation at Abbvie Ventures says a number of Pharmas continue to go earlier and earlier to find deals. However, in order for those opportunities to arise, the funding must be there to get companies to the inflection points that make acquisitions appealing. And here, he also sees increased demand. On the funding side, it can actually be hard to get in on a hot syndicated round, suggesting competition for great early-stage ideas

Another thing we see today, that we did not see maybe five years ago, are platform acquisitions where the acquirer is not just after a single lead. Marc Schneidman suggested this change is also an indicator of Pharma demand and commitment to the early-stage.

With respect to going earlier on the pipeline side, BMS, Abbvie, JNJ and many others are creating new roles for managing the dialogue with academic centers. Part of it is “academic relations”, but more and more is a discussion about partnering and spinning out assets earlier into helping “start-ups” launch. Roden pointed out that BMS has 92 ongoing academic relationships or collaborations. More specifically, big companies, and/or their venture arms, are beginning to go pre-series A into the seed stage.

One more factor that may be buffering any potential downdraft in M&A is the continued uptick in CVR use for acquisitions. Claire O’Brien, who provides counsel on M&A largely in the med-tech side, suggests that this may counter balance some of the uncertainty effects seen on the political landscape with Brexit and the US presidential election which might make buyers more risk averse (for certain geographic areas).

The biggest CVR structured buyout of 2016 is Stemcentrx. It was sold for ~$10 billion, but $4 billion is back-loaded as earn outs (CVRs). (See this Fortune article on Abbvie’s recent purchase.)

David Parrot, who has been in biotech banking for 25 years, sees more buying in the near future as the strategic incentives at large and mid-size companies continue to fill the demand side. Other panelists commented that if the IPO market does pause in 2017, then exit by acquisition becomes a more viable route, and we may see an uptick.

Although we have a few months to go in 2016, M&A results for the small R&D-stage biotechs looks rock solid, with the 2nd highest dollar amount in a decade. In fact, 2016 is already above the Pharmasset year of 2011. 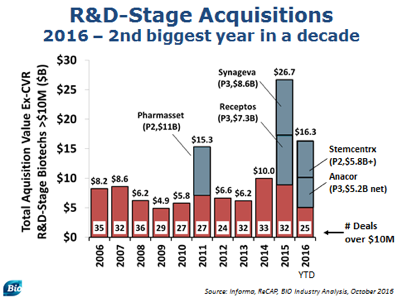 Looking closely at the chart reveals that 1 or 2 buyouts can make all the difference in the annual assessment of total Pharma shopping. For 2016, two deals, each over $5 billion, are getting the attention. However, overall M&A volume (by # of deals valued >$10M) remains consistent over the last decade, and we once again look to approach the decade average of 32 acquisitions.