Doggonn It! This Kitty May Be Researchers’ New Best Friend

September 15, 2011
The glow-in-the-dark cat is out of the bag. Researchers at the Mayo Clinic in Rochester, Minnesota have genetically modified domestic cats to resist the feline form of AIDS. As reported in the journal Nature Methods, this new achievement is a milestone in the ongoing quest to protect humans from the virus. 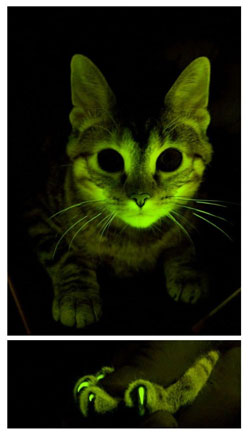 And yes, these kitties glow in the dark.

A green fluorescent protein was added to a gene from rhesus macaque monkeys that is known to restrict the feline and human form of the disease. This method allows researchers to easily determine whether the gene had been successfully incorporated into cat DNA. If the cats glowed under a special light, the transfer and expression was successful.

Even better news is that the transgenic cats have successfully passed both traits (glowing and resistance) along to their offspring. In other words, the manipulated DNA is now an inherited trait.

Glow in the dark cats are nothing new – but that doesn’t mean I don’t want one. The real news here is the potential for developing disease resistant genetic lines.