April 19, 2018
There is a lot to be excited about in biotech right now as we are coming off the heels of a near record year for new drug approvals and many exciting, first in class breakthrough products making their way to patients.

Taking a closer look at these transformative therapies in last year's FDA approval list reveals numerous biologics indicated for cancer and rare diseases. Among the CBER Biologic Licensing Application (BLA) approvals, we find the 1st gene therapy approved in the U.S. for a rare disease (SPARK Therapeutics), as well as two ex vivo cellular engineering feats for blood cancers (the CAR-T approvals from Novartis and KITE). Among the CDER BLA approvals, a healthy 12 hitting the record set in 2015, we find 5 antibodies for cancer and 2 enzymes for rare disease.

Looking at licensing, >70% of the largest deals last year were in oncology or rare disease.

Checking in on the stock market reveals 60% of recent IPOs are in oncology and rare disease.

And what about earliest stages of investment? Oncology venture funding dwarfs other costly disease areas by 10x.

Here is a plot of the last 10 years of venture capital heading into innovative novel R&D on the y-axis vs. annual healthcare costs in the US plotted on the x-axis for some of the major disease areas: 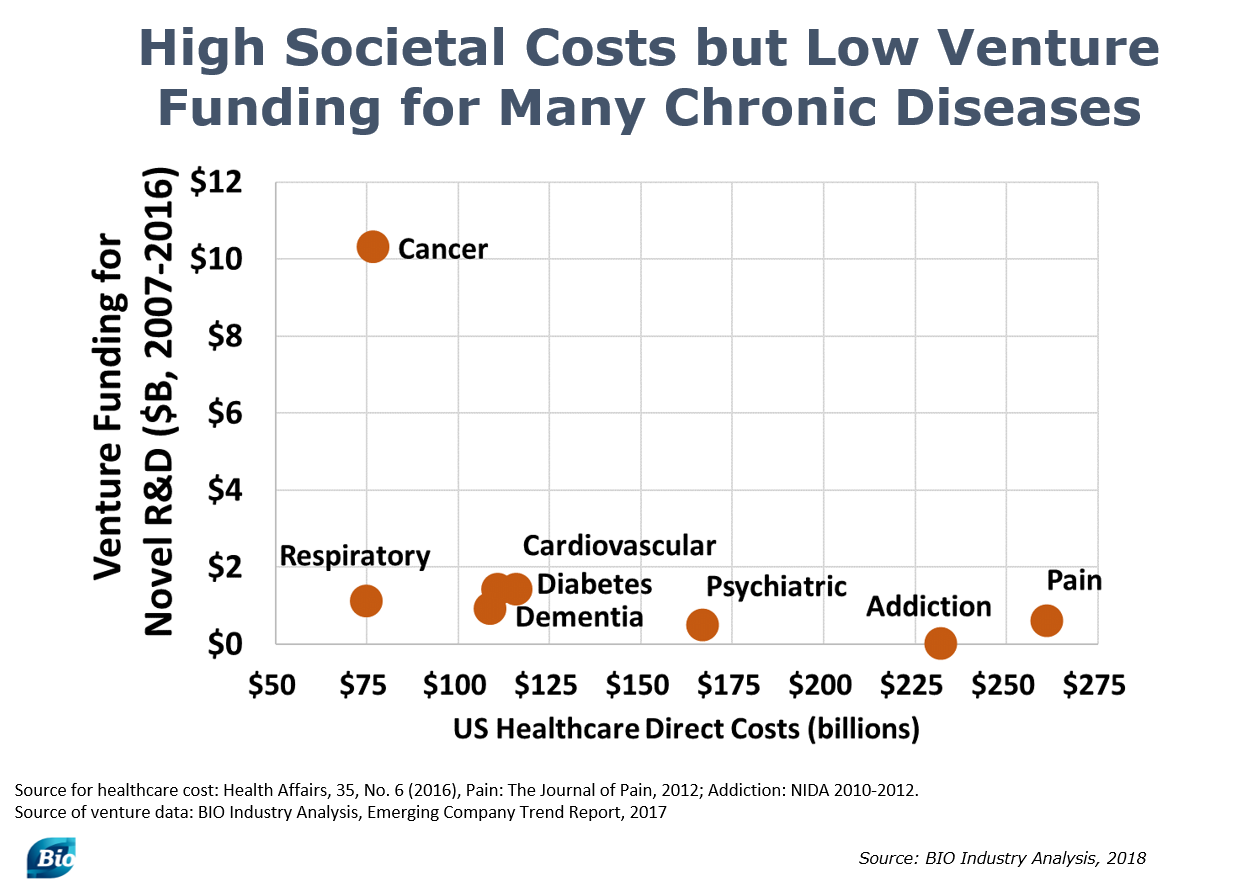 Cancer, with $10.3 billion invested and annual costs to the HC system of $75 billion stands out well above the rest. We see Cardiovascular diseases, Psychiatric disorders, Pain, and Addiction way out in front in total healthcare costs, but with a rather tiny amount of venture investment, under a billion over a decade.

We seem to have developed a disproportionate level of investment vs. total healthcare spending and this becomes even more distorted when we take into account total economic burden that countries face. For example, pain and addiction combined are now estimated to be $1.4 trillion per year in total economic costs to society in the US alone, and yet we see annual investment for novel drugs in this combined space at levels a single I/O company might receive in a single round.

Not crossing the finishing line, and in some cases not even attracting the capital to take shots on goal, are the Highly Prevalent Chronic Diseases.

To assess the extent of the exodus, BIO has initiated an investigation into each specific highly prevalent chronic indication, and we are publishing the results in a series of white papers. So far this year we have published two papers [which can be downloaded at the BIO Industry Analysis website here]. The first report is on the state of innovation in Depression, the second covers both Pain and Addiction.

What have we found so far? 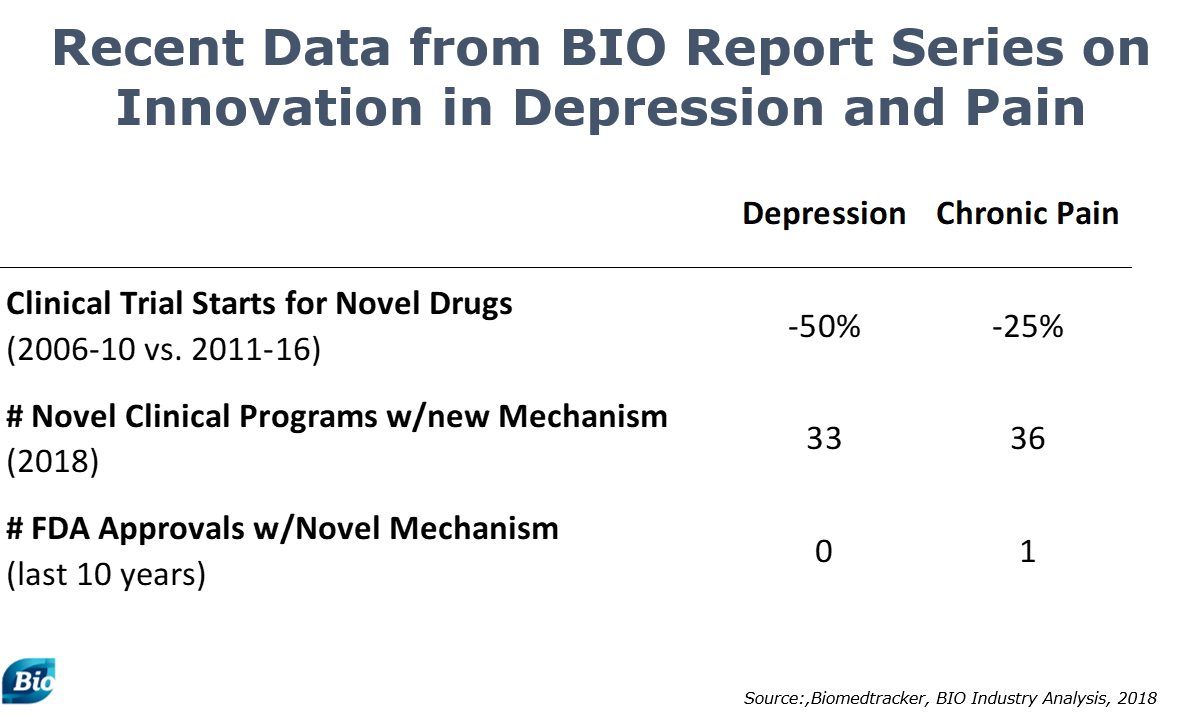 Although there is a lot more to dig into in the two reports, here are a couple of takeaways:

Looking at industry-wide clinical activity, which is a proxy for investment from big pharma, mid-size pharma and small biotechs, we see a dramatic downshift comparing the most recent 5 year period vs 2006-2010. Clinical trial initiations for novel drugs in depression are down 50% and down 25% in pain.

The clinical pipelines for novel approaches in depression and pain sit at 33 and 36 programs, respectively. For comparison, oncology which has >1,600 drug programs for novel targets, based on an MOA screen of the Biomedtracker database. With some of the lowest success rates in the industry (for novel drug candidates in depression and pain), and essentially no completely novel drugs approved in recent years, more shots on goal are needed.

If we see the same findings in other highly prevalent areas in our upcoming reports, and if this trend persists, there could be implications for the future output of innovative medicines in these disease areas. While drug interventions and potential cures hold the key to reducing societal costs of disease, these will not materialize if investment is in decline.

It is important that barriers to therapeutic innovation are identified and removed, so investors and large pharma companies re-enter these chronic disease areas and make non-incremental innovation a priority. Perhaps we need to take a page out of the oncology and rare disease playbook and subdivide these big diseases into molecularly-defined subpopulations. Indeed, the science is driving force behind much of the excitement and promise in those areas. But there may be other drivers that need a reassessment of the status quo, such as potential regulatory and reimbursement barriers.
More on This Topic