June 23, 2015
On June 1 in Easton, ME, American Agri-Women (AAW) set out on a 5 month long drive across the USA to celebrate their 40th anniversary and women’s roles in agriculture. Making stops at major cities like Washington D.C., the AAW strives to amplify the conversation between farmers, consumers, the media and lawmakers at their delicious BBQs, farm visits, manufacturing tours and other public events! Their drive will finish in November when they arrive at their annual convention held in Portland, ME. 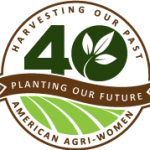 ow run about 14 percent of the nation's farms, up from only five percent in the 1980s. In a typically male dominated industry, more women are beginning to take on leadership roles — which is nearly unprecedented just a few decades ago. AAW encompasses this shift, and helps young women  fulfill their dreams of becoming a farmer and managing their own business.

AAW has an inspiring history. Their association emerged in a time when the agricultural industry was disjointed and fragmented:


“Many felt agriculture needed to develop a voice to speak for the entire industry. Women were to play an important role in developing a united voice for agriculture. In 1969, a group of women in Oregon organized as a result of government regulations banning farmers burning fields. Oregon Women for Agriculture (OWA) stood alone, for their husbands were too busy farming to respond and fight the forces that were determining the course of American Agriculture."

OWA then joined with Women for the Survival of Agriculture in Michigan (WSAM), and decided it was time for women in agriculture to have a national unified voice. Since then, AAW has grown to be in coalition with 50 state, commodity and agribusiness affiliate organizations and is now the largest coalition of farm, ranch and agribusiness women:


AAW has much to be proud of in our 40-year history as a volunteer-driven grassroots organization with the ability to impact lives and agriculture on the local, state, regional, national and international level. Perhaps more importantly, we look to our future with great excitement and anticipation of all that we can be,” said Doris Mold, First VP, “Harvesting Our Past, Planting Our Future”

The drive across America is sponsored by many companies and associations, such as the Renewable Fuels Association, whose mission is to drive expanded production and use of American-made renewable fuels and bio-products worldwide. Many of BIO’s members also belong to Renewable Fuels Association and are committed to helping our country become cleaner, safer, and more energy independent.