April 19, 2017
Saturday, April 22, 2017, is Earth Day.  At BIO, Earth Day is a reminder of the many ways that biotechnology has helped revolutionize farming and make it more environmentally friendly.  Not only are the world’s farmers producing more food than ever before, we’re able to do it in ways that conserve water, preserve soil nutrients, lessen the need for pesticide applications and reduce greenhouse gas emissions.

One of the little-known environmental benefits of GMO crops is the increased use of conservation tillage.  Prior to biotechnology, farmers would have to till the soil to control weeds. But tilling can cause soil erosion, destroy soil structure, reduce soil quality and deplete the soil's organic matter. 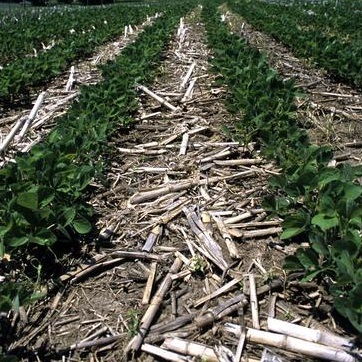 Soybeans grow in a field of corn residues from the previous year; no tillage was done prior to planting, to save soil, energy, time and money. (Photo courtesy of NRCS)[/caption]

GMO herbicide-tolerant crops allow farmers to plant directly into residue left from last season’s crop, without tilling the residue into the subsurface.


The Global firm, PG Economics, releases a Global Impacts Study each year quantifying the benefits of biotech crops.  In its most recent study, it states:


"Crop biotechnology has contributed to significantly reducing the release of greenhouse gas emissions from agricultural practices. This results from less fuel use and additional soil carbon storage from reduced tillage with GM crops. In 2014, this was equivalent to removing 22.4 billion kg of carbon dioxide from the atmosphere or equal to removing 10 million cars from the road for one year."

The ecological benefits of conservation tillage are clear, but what does it actually mean for farmers and how, after thousands of years as a mainstay of agricultural production, have we become less reliant on tilling?

Kate Hall, managing director of the Council for Biotechnology Information and GMO Answers spokesperson, answers this question in a recent column in Forbes, “Why Soil Health Matters & How GMOs Play A Key Role”:


"Advances in biotechnology, particularly the development of GMO crops, have been instrumental in facilitating conservation tillage and resulting improvements in soil health. The development of herbicide-tolerant GMO crops was a breakthrough. By allowing farmers a highly effective and reliable means to fight weeds by chemical means, GMOs have reduced reliance on tillage for weed control and made it easier and less risky for farmers to adopt more sustainable production strategies." 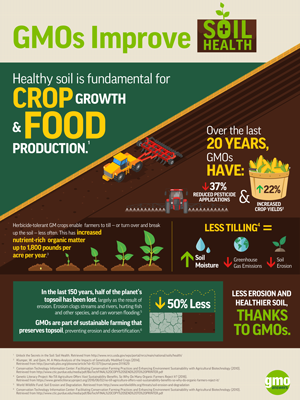 GMO Answers explains this in an infographic “GMOs Improve Soil Health.”  You can view more infographics, videos and read more about how GMOs help make farming more Earth-friendly on the GMO Answers website.