Enjoy Your Halloween Candy Without the Guilt

October 27, 2014
More than 90 percent of the sugarbeets grown in this country are GMO. And genetically modified sugar beets make up half of the U.S. sugar production.  So if you’re eating foods containing sugar, chances are, those foods are GMO. 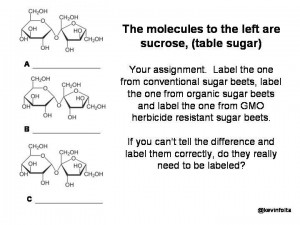 But it is interesting to note that sugar made from GMO sugarbeets is indistinguishable from other sugar because the GMO protein in the beets is removed in processing. GMO sugar beets are genetically engineered to tolerant herbicides because weeds love to inhabit sugarbeet fields and threaten to steal sunlight, water and nutrients from the crop. Sugar from all sources has been tested at the molecular level, and scientific evidence has proven that there is no DNA or protein present in refined sugar. Therefore, sugar, whether from sugar beets and sugarcane or from sugar crops grown using conventional, biotech or organic methods, is identical. Furthermore, there is also no difference between domestically and internationally grown sugars.

A number of prestigious U.S. and international scientific bodies - such as the U.S. National Academies of Science, the United Nations Food and Agriculture Organization (FAO), the World Health Organization, the Organization for Economic Cooperation and Development (OECD) and the American Medical Association (AMA – have determined that biotech crops are as safe as similar crops improved through traditional and organic breeding methods. A 2004 report by the National Academies, for example, found that “biotech crops do not pose any more health risks than do crops created by other techniques and that food safety evaluations should be based on the resulting food product, not the technique used to create it.”