Environmentalists Want to “Stick” It to Farmers

August 19, 2009
Jason Hill of the University of Minnesota’s Institute on the Environment wrote recently in the St. Paul Pioneer Press, asking why the Waxman-Markey climate change bill should treat agricultural emissions differently from energy and transportation emissions, with a “carrot-and-stick approach, one in which fossil fuels suffer the stick while agriculture feasts upon the carrot.” Hill’s primary objection to the bill is the amendments added by Rep. Collin Peterson (D-Minn.), which exempt agriculture and forestry from carbon caps but provide credits for carbon sequestration that farmers can trade on the market. They also would postpone implementation of the EPA’s analysis of international land use change.

Writes Hill, “Peterson's amendment is essentially nothing more than a slick accounting trick, one meant to portray biofuels produced in this nation in a better light while making the carbon footprint of agriculture in developing countries look worse.”

This is a bizarre statement, turning even the theory of indirect land use change on its ear. The original calculation of indirect land use change put forward by Searchinger et al held that “when farmers use today’s good cropland to produce food, they help to avert greenhouse gasses from land use change.” Further, in the context of international negotiations for a climate change treaty to replace the Kyoto Protocol, the ILUC theory is clearly an attempt to shift accounting of carbon emissions in developing countries onto U.S. biofuels.

Calculations of land use change by current models are completely contradicted by agricultural trade and production numbers, making the models appear to be nothing more than accounting tricks. The model projections look nothing like real outcomes because they rely on several false premises and double count certain sources of emissions. The greatest fallacy of the ILUC theory is that worldwide agricultural productivity has already reached a natural limit and cannot respond to increased demand in any other way than clearing of rainforests. The main premise of the theory – that biofuels have been introduced into a static worldwide agricultural system and therefore are the primary cause of shifting agricultural production – is an assumption that can’t be supported by data.

Using USDA’s modest assumption for growth in yields of U.S. corn over the life of the Renewable Fuel Standard, a simple calculation shows that corn productivity can keep up with demand to produce the conventional biofuel portion of the RFS. This assumes continuation of 2016 to 2018 USDA projections for 2022 – constant total planted acreage of 90.5 million acres, increase of 75 million bushels per year for fuel ethanol, and increase of 1.8 bushel per acre per year yield improvement: 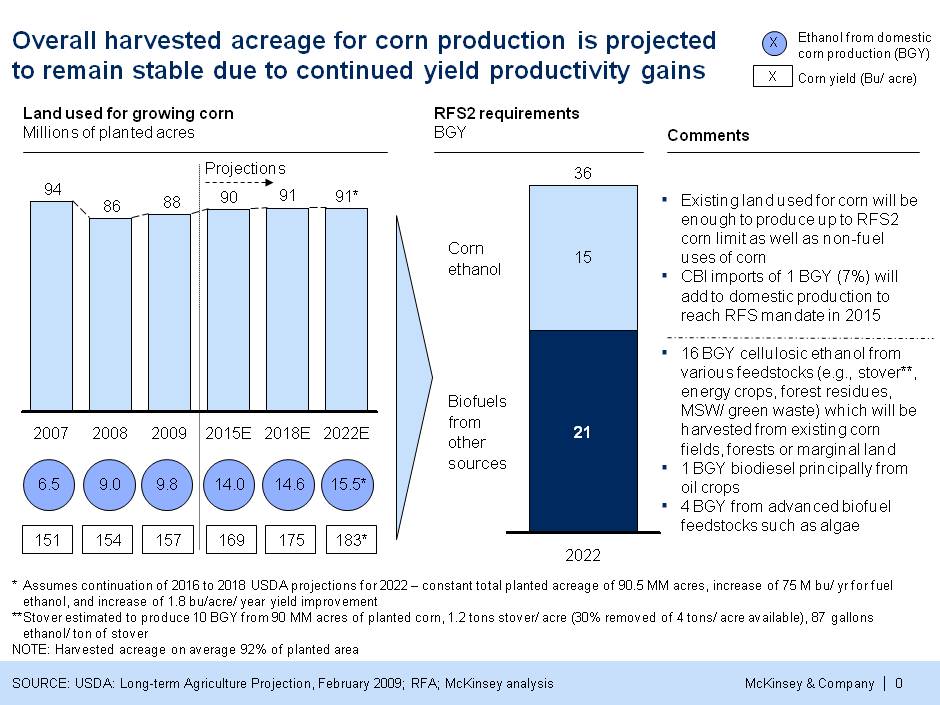 In fact, USDA currently projects a corn yield of 159.5 bushels per acre for this year. And USDA projections from January 2009 show that inclusion of biofuels will stabilize land use, in terms of the acres planted to the eight major crops:

Beyond this, and despite a report) that deforestation in Brazil increased in June, the deforestation rate in Brazil continues to decline. Responding to the Agence France-Presse report, Mongabay noted, “Deforestation in the Brazilian Amazon typically peaks during the June-August dry season when ranchers and farmers burn forest to clear land for development.”

A group of scholars – that includes Hill – recently called for a focus on real solutions to climate change. The world needs economic growth, energy and food. We should not premise our search for solutions on the false notion that these three necessities are in direct competition with each other.
More on This Topic