April 2, 2014
What Environmental Working Group Doesn't Want You to Know

On Friday March 28, the Environmental Working Group posted what they imagine to be a scathing critique of a recently published study, authored by BIO, of the greenhouse gas emissions impact of EPA's proposal to reduce biofuel use in 2014. (See Corn Is Magic? on the EWG.org site). It's clear that the author never actually read our study, since her commentary has nothing to do with the content. But apparently, EWG doesn't want its audience to read the study either. BIO's Brent Erickson attempted to post a reasoned reply on the EWG blog -- which usually allows comment -- but his post was not accepted by the censors at EWG. (See screen-capture of the post here.) Below is the full text of BIO's response: 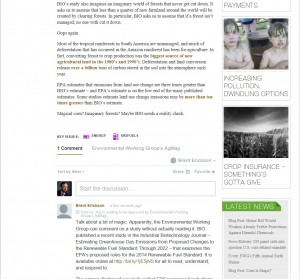 Screen-capture of BIO's response to the EWG blog. The post was not approved by EWG.[/caption]

Talk about a bit of magic. Apparently, the Environmental Working Group can comment on a study without actually reading it. BIO published a recent study in the Industrial Biotechnology Journal – Estimating Greenhouse Gas Emissions from Proposed Changes to the Renewable Fuel Standard Through 2022 – that examines the EPA’s proposed rules for the 2014 Renewable Fuel Standard. It is available online for all to read, understand, and respond to.

The primary finding of our study is that EPA’s proposed reductions in biofuel use over the next few years would automatically increase use of petroleum and associated emissions of greenhouse gases. The second important finding is that if EPA’s proposal undermines development of advanced biofuels – as we expect it will – the United States will lose an opportunity to displace additional petroleum with biofuels that achieve measurable reductions in greenhouse gas emissions.

The model we developed begins with Energy Information Administration projections of fuel use from 2013 through 2022, which predict use of diesel to steadily increase over the time period and use of gasoline to increase in the short term before declining again by 2019. We next calculate the percentages of petroleum blendstock for gasoline and diesel, ethanol, biodiesel, advanced and cellulosic biofuels that would be used each year under a few scenarios – the EPA’s proposed methodology, the statutory RFS rules, and a continuation of the past practice of setting the advanced biofuel volume obligation at the highest achievable level. The volumes of each portion of the fuel supply are then assigned GHG emission scores – measured in metric tons of CO2 equivalent – and an annual total is tallied for each scenario.

The greenhouse gas emission scores are drawn from the GREET1.2013 model, which includes land use change calculations for biofuels. This model includes an updated emissions profile for petroleum fuels, since the United States now relies more on marginal sources of petroleum – such as Canadian oil sands – than it did in 2007. However, our model allows for EPA’s estimates of emissions to be used. The primary and secondary findings remain the same. If we increase petroleum in our fuel mix over the next few years by decreasing biofuel use, that petroleum will come from Canadian oil sands. Relying on market forces to decrease overall fuel use will not work in the short term either, since economic recovery will unleash pent-up demand for transportation fuel.

It is surprising that EWG and its financial backers would consistently advocate increased U.S. reliance on foreign oil with its increased carbon penalty. It is also surprising that EWG supports EPA’s proposal, which will stop short commercial development of cellulosic and other advanced biofuels at this critical juncture. For its part, BIO has long been accused of magical thinking in regard to technologies such as cellulosic biofuel that have an environmental benefit. We’ll proudly carry on.
More on This Topic