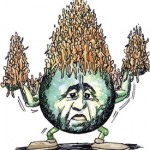 The United Nations Food and Agriculture Organization (FAO) says the world needs to boost agriculture production by 60 percent to meet its estimated food needs over the coming decades.

This is not a new concern for the world agriculture and food production community.  On October 30, 2011, our world’s seventh billion person was born.  Of these 7 billion, close to a billion are chronically undernourished and another billion are malnourished, according to the United Nations.  In the next 50 years, the world’s population will swell to 9 billion during which the human race will consume twice as much food as it has since the beginning of agriculture, 10,000 years ago.

As the rate of population growth outpaces the rate of food crop production, the world faces a food crisis that will require the full deployment of every plant breeding technology currently available.

The FAO says improving food security by 2050 will require a second “Green Revolution.”  The Green Revolution of the 1960s came with the introduction of industrial farming practices and high-yielding plant varieties, which helped farmers stay ahead of fast-growing populations.

But a so-called “second Green Revolution” could be jeopardized by what most scientists describe as “the irrational fear of GM food.”

Dr. Marc Van Montagu, founder and chairman of the Institute of Plant Biotechnology Outreach at Ghent University in Belgium and co-recipient of the 2013 World Food Prize, wrote in the Wall Street Journal:


Resistance to biotechnology seems all the more unbelievable considering that much of it comes from the same thoughtful people who tend to dismiss climate-change skeptics as ‘anti-science.’ It seems to me that much of the resistance to GM foods isn't based on science, but may be ideological and political, based on fears of ‘corporate profiteering’ and ‘Western colonialism.’”

Most recently, the Independent wrote an editorial saying “the anti-GM lobby is holding back a scientific advancement that could change the world for the better.”


Scientific breakthroughs that promise the alleviation of some of humanity’s most pernicious ills are coming increasingly thick and fast as the white heat of biotechnology is applied to the curses of malnutrition and disease in the developing world.

“…Environmentalism is doing itself – and humanity – a gross disservice with its blanket opposition to GM. By 2050, there are predicted to be 9.5 billion people on the planet and food production must double to feed them. We need to grasp all tools to meet that challenge and not discard one of the most promising on the shaky grounds of dogma.”