August 11, 2014
Years in the making, the Ebola virus has recently erupted into a full blown health crisis. As of this week, it has claimed the lives over a thousand people – mostly in Liberia, Sierra Leone, and Guinea. 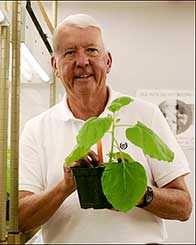 Ebola is one of the world’s most virulent diseases and treating it is complicated by the fact that it is highly contagious and deadly.

The infection is transmitted by direct contact with the blood, body fluids and tissues of infected animals or people. Severely ill patients require intensive supportive care. During an outbreak, those at higher risk of infection are health workers, family members and others in close contact with sick people and deceased patients.

An early-stage research experimental serum containing antibodies produced in specially modified tobacco plants may have just saved the lives of two aid workers infected with the virus. This vaccine, called ZMapp, has yet to reach even a basic Phase-I human trial, and is the result of early stage research conducted at the Biodesign Institute at Arizona State University.

You can read more about the research behind the vaccine on the Arizona Bioindustry Association’s website.
More on This Topic