Fireside Chat: “Everything we knew in science 10 years ago is wrong.”

October 21, 2015
The speed of scientific innovation these days is comparable to the PC innovation era of the 1980s, according to Robert Nelsen of ARCH Venture Partners at today’s BIO Investor Forum fireside chat.

This is not to say that he feels investing in biopharma is a short term game. Robert urged the audience to “keep their faith” in good science and the “good ideas will percolate up” to yield innovative breakthroughs. 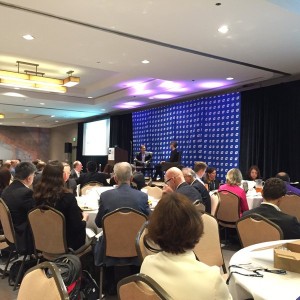 Having played a significant role in the early sourcing, financing and development of more than thirty companies, including fifteen which have reached valuations exceeding $1 billion, Robert understands the value of team building. “If you get fifteen to thirty amazing people together, you can outcompete anyone.” It is through the strength of these relationships that he identifies and develops the good ideas. Though, he emphasized that investors should not “get too lost in the science,” or they may not be willing to make bets in the first place.

The intellectual property, he says, is secondary to getting the scientists in the door. “Right place, right time, right people,” he says. “When this comes together you can recruit anyone,” referring to attracting the critical venture capital. Robert reiterated the often heard mantra that Big Pharma needs to innovate and be more nimble. They need to act and think and make bets like biotechs. “Next generation drugs come from tiny companies.”

The chat’s focus turned to the industry’s responsibility for communicating the value of our industry. He counseled BIO to force the conversation with Congress and payors that the net results of innovation are real cuts to healthcare spending. “BIO needs to communicate what the win is,” he said, and the win is not always saving money. Predicting that a $100k pill to stop the progression of Alzheimer's would save taxpayers billions yearly and dramatically improve lives, he said “isn’t that worth it?”
More on This Topic