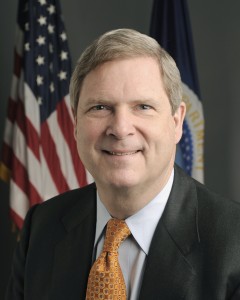 Not everyone knows it, but most Americans use biofuels to help power their car or truck every day.  Using biofuels we produce here at home creates jobs, raises incomes for farmers, and saves us all money.  The ethanol mixed into the gas we buy at the pump saved American drivers almost 90 cents per gallon last year.
Moving forward, we’ll see Americans running their cars with more biofuels mixed into the gas – like E85, a mix with 85 percent ethanol.  And USDA will help install thousands of new pumps at gas stations so drivers can pick the sort of fuel they want.
And it’s not just car and truck owners who can benefit from renewable biofuels.  Biofuels can be used in all sorts of engines and planes are getting into the act as well.
This month, two major U.S. airlines flew the first commercial passenger flights powered by biofuels, including a cross country flight from Seattle to Washington DC.  Airlines are looking for reliable, affordably-priced fuel.  They hope that using biofuels will limit the impact that unpredictable gas prices have on their bottom-line, making them more profitable while also limiting their impact on global climate change.
Passenger and cargo airlines in America spend about $50 billion on fuel each year.  If just a fraction of those billions are used to purchase American-produced aviation biofuels, we’ll create thousands of good-paying jobs, particularly in our rural communities.  That’s why, earlier this month, USDA announced support for a facility that will begin the process of turning algae into jet fuel and create 60 jobs.
What’s more, USDA has made important investments on aviation biofuels research and development to help universities and private firms expand and improve production.  And we are partnered with the Department of Energy and the U.S. Navy to work towards using biofuels in our military planes and strengthen our national security.
In the years to come using new sources of renewable energy to fuel our cars, trucks and even our planes will be a game-changer: reducing the influence that foreign nations have in setting our fuel prices, driving economic growth, and creating jobs across the country.

Vilsack Biofuels for Aviation
More on This Topic