Food Before Fuel Is a Fight Between the States

September 25, 2012
Large swaths of the United States have experienced extreme and exceptional drought conditions this year. And the USDA has predicted lower yields and supply for corn through the remainder of the year. This has touched off a revival of the food before fuel debate, with very few speaking up on behalf of the fuel side.

Governors from eight states – Delaware, Maryland, Arkansas, North Carolina, Georgia, New Mexico, Texas and Virginia – have written EPA requesting or supporting others’ requests for a waiver of the Renewable Fuel Standard. EPA is currently accepting public comments on the requests. An examination of which states are making the requests and their stated reasons yields some interesting data points.

Nearly all of the states whose governors have demanded the RFS waiver are from the Southern Seaboard agricultural region (defined as Delaware, Maryland, Virginia, North Carolina, South Carolina, Georgia, Alabama, and parts of Mississippi, Louisiana, Texas and Arkansas). New Mexico is the exception. And all of these states produce small amounts of corn, primarily as animal feed, but not large volumes of conventional biofuel, as the map below from USDA’s National Agricultural Statistics Service shows. 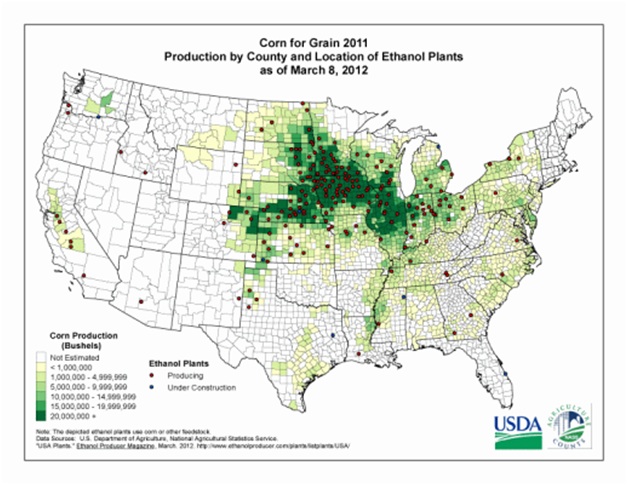 Southern Seaboard states have large livestock industries but relatively little biofuel or industrial demand for corn. Statements by the governors indicate that the drought has impacted their states’ abilities to both grow corn and obtain it at low cost from other states for their animal feed industries (emphasis has been added below):


“It is expected that our farmers will experience at least a 40% yield reduction in this year’s corn crop alone, which does not account for the fact that this is the third consecutive year in a row that corn yields in our region will be significantly below estimates. Therefore, the region has had to supplement its additional corn needs from the eastern corn belt, primarily Indiana, Ohio and Michigan, which have also suffered through months of a prolonged drought.”


“In addition to the direct economic damage from drought within the border of our state, Georgia is heavily dependent on grain produced in other states to support its poultry and livestock industries….


“New Mexico’s agricultural economy is primarily composed of dairy and range livestock production. These two industries require large feed inputs for their animals due to the drought, resulting in an exponential increase for feed costs.”


“Virginia’s livestock and poultry industries are the largest sectors of the state’s agricultural economy…. More than 70 percent of all agricultural farm market value for the Commonwealth. Virginia is heavily dependent on corn and other feed produced elsewhere to support its poultry, dairy, swine and cattle industries.”

The primary difference in the cost/return calculation was the value of the production per acre, as the graph below shows. Overhead costs – which include land rents, labor and capital recovery – in Southern Seaboard states were much lower than the national average. Basic operating costs – which include fertilizer, fuel and water – were relatively equal.

Yield may have been a factor in the difference between return on costs per acre prior to 2011, but the impact appears to be leveling out. In fact, according to the September Crop Production report from NASS, Delaware and Virginia are the only states among those requesting the RFS waiver that have experienced a decline in yields per acre in 2012 due to the drought, compared with 2011. Maryland is expected to remain relatively even. A few of the other states – notably Arkansas, Georgia, North Carolina and Texas – are actually expected to achieve significantly higher yields per acre in 2012 than in 2011. And both Arkansas and Texas expect to harvest significantly more acres of corn this year compared to last.

States in the Heartland and in the middle of the country, where biofuel production is at a high concentration, are where drought conditions have impacted corn yields the most this year, according to the NASS report.

Achieving profitability in 2011 certainly appears to have spurred farmers in the Southern Seaboard states to boost productivity and yields. That profitability stems from the additional demand for corn from markets other than animal feed – such as conventional biofuel production or industrial uses. Undercutting the RFS now could undermine profitable corn production in those very states in the future.

Researchers at Purdue University ran an analysis of the potential economic impact of the waiver requests. Their conclusion should caution EPA from granting them:

“It is important to understand that economic harm in the tens of billions of dollars has already been done by the drought. The corn price is substantially higher than would have transpired in a normal year. In considering a waiver, EPA cannot change the loss, but can only redistribute it among the affected parties—ethanol producers, livestock producers, corn growers, and ultimately domestic and foreign consumers.”

The drought has already redistributed patterns of profit and loss for corn farmers. The food before fuel argument and a waiver of the RFS seek to further shift the loss toward states in the Heartland. The EPA will be seeking comments on the waiver requests until Oct. 11, 2012.
More on This Topic