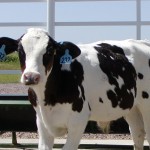 On a farm outside Sioux Falls, South Dakota, a herd of cloned, genetically engineered cattle are busy incubating antibodies against the Ebola virus.

Researchers hope the cattle - which certainly don't look like anything special - will produce gallons of blood plasma that could be used to treat people with the deadly virus, which has infected more than 21,000 people in West Africa and killed 8,500 of them.

The cattle have been genetically engineered with human DNA so that their bodies don't produce cattle antibodies but human antibodies. They're cloned to make a herd of genetically identical, part-human animals.

Then they are vaccinated against various deadly diseases such as Ebola. Their bodies produce antibodies in response to these vaccines, and the hope is these antibodies can be used to treat people with the diseases.

The approach is similar to the idea behind transfusing plasma from Ebola survivors into patients. No one knows if it is actually helping, but experiments are under way in Liberia and at Emory University Hospital in Atlanta to see if the blood of survivors might kick-start the immune response in a patient.

Many Ebola patients have been transfused with either whole blood or serum, which has the red blood cells removed. No one knows if it has helped but doctors hope it does.

Ebola survivor Dr. Kent Brantly has to date given more than a gallon of his own blood plasma for such treatments.

Using cattle might make the project larger-scale. "From these animals, we can collect 30 to 60 liters of plasma each month," Sullivan told NBC News. "That translates into something between 500 to 1,000 human doses per month per animal."

The company, working in partnership with the U.S. Army Medical Research Institute of Infectious Diseases (USAMRIID), has been testing the approach against hantavirus, a rare killer virus that causes regular outbreaks, including one that killed three campers at Yosemite National Park in 2012.

Experiments using an Ebola vaccine were fast-tracked when the epidemic broke out in Liberia, Sierra Leone and Guinea last year.

"It's not a given that this is going to work for Ebola," said Connie Schmaljohn, a senior research scientist at USAMRIID who's working on both the hantavirus and Ebola projects.

First, the cattle are vaccinated against Ebola, using what's called a DNA vaccine. Then, plasma is removed and the antibodies taken out of the plasma. The antibodies - which are identical to human antibodies - are shipped to USAMRIID labs in Fort Detrick, Maryland for testing.

There, a team has worked in a level 4 biosafety lab - the highest level of biosecurity - to first infect mice with Ebola virus, then dose them with antibodies.

"The first mouse studies have shown we can protect mice one day after they been infected but not two days after they have been infected with a single dose," Schmaljohn told NBC News. Now, the team is giving the mice a dose a day to see if that helps.

"Ebola is a much tougher virus to protect against than hantaviruses are," Schmaljohn said. "It is a faster replicating virus. It is more virulent. It is more lethal to humans." While hantaviruses kill between 5 and 10 percent of victims, Ebola viruses kill 50 to 90 percent.

The next step will be to test the approach in monkeys. But if it works, it could be quickly deployed for testing in people, Schmaljohn says.

"These are fully human antibodies and they can make them under GMP (good manufacturing practice) conditions so they could go right into people," Schmaljohn said.

There are many questions about the approach. It's not even clear if human antibodies from human Ebola survivors help patients. The antibodies produced by vaccination will almost certainly be different - probably more limited in range, Schmaljohn said.

That's because the immune system recognizes various pieces of an invader. These bits and pieces, called antigens, can be numerous, and it's not always clear which is the "best" one for fighting off infection.

"The human convalescent plasma has antibodies against more antigens," Schmaljohn said. "Ours could be better - or it could be not as good."

Plus, the antibodies alone might not be enough. Blood also contains the T-cells and other immune system cells. But the cattle don't produce human blood, so their plasma cannot be transfused into human patients.

Makers of the experimental drug ZMapp have taken a different tack, using three lab-engineered antibodies that specifically target Ebola. ZMapp's been tried in just a handful of people but in tests in monkeys, it's been shown to work well.

The cattle - black and white Holstein-Jersey crossbreeds - are kept on a farm in Iowa, just across the border from Sioux Falls. "Right now we have 50," said Sullivan.

"They are fairly expensive to make. These animals are very unique, as you can imagine."

The technology used to make the cattle dates back to 1998, when cloning techniques were just being perfected for farm animals. Dolly the cloned sheep, the first animal cloned from an adult mammal, was born in 1996.

Only about 10 percent of the cattle embryos survive as calves, so each one is precious.

But their fully human immune systems mean they could be a gold mine for treatments, if the approach works. The company is working to produce antibodies to various strains of influenza, as well as to Middle East respiratory syndrome (MERS), which has infected 948 people and killed at least 349 of them, according to the World Health Organization.
More on This Topic